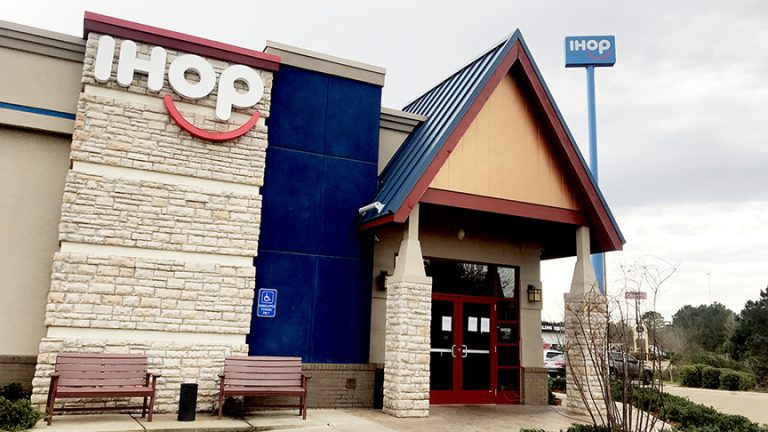 At least three Mississippi IHOP restaurants were abruptly closed Monday. Restaurant workers were informed of their terminations by a paper sign on the door. (photo by Luke Horton, The Daily Leader).

Mississippians in three cities who woke up Monday with a hankering for pancakes were disappointed when they found their local IHOP restaurant had been closed abruptly. Employees were effectively fired by paper signs on the doors.

Restaurants in Brookhaven, Laurel and Pascagoula were closed early Monday morning. Restaurant employees and patrons were greeted with a locked door and paper signs emblazoned with “We have made the difficult decision to permanently close your IHOP location.”

Employees arriving for work were shocked by the decisions and left wondering if they’ll be paid for time previously worked.

One of the signs on the door to the Brookhaven location was apparently the company’s only way of firing the employees: “Therefore, your employment with the company is ending effective February 25, 2019.”

A U-Haul truck was parked behind the Brookhaven restaurant Monday with some employees on hand. They declined to comment about the closure.

The Brookhaven store closure comes just a few weeks after a television report detailed the restaurant’s “C” grade on its health inspection. The TV report said insects were found in the building Jan. 23. A sewage leak was also reported at the restaurant last month.

The IHOP in Laurel was closed Hattiesburg area TV station WDAM reported. A sign with similar information was posted on the door of the location Monday.

Carolyn Lewis, a former employee at that location, said she was caught off guard by the news that she no longer has a job.

“They shut the doors on us today, and we don’t know why,” Lewis said.

Lewis said she and other employees worked hard to attract people to the business and were shocked to know the doors were now shut. She’s now left wondering what tomorrow holds.

“I’m just heartbroken because I loved my job,” she said. “This was my only source of income.”

The Pascagoula location had similar signage on the doors.