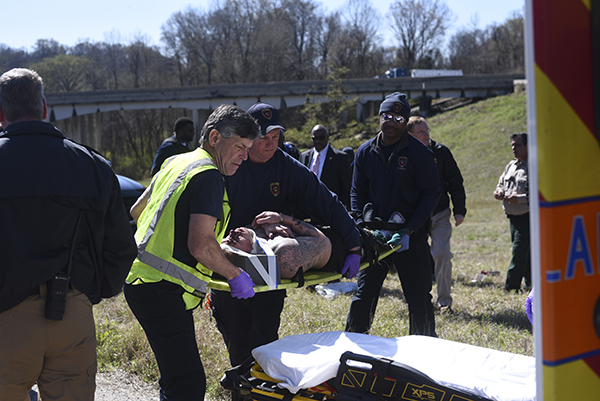 Paramedics tend to a man that jumped into the Mississippi River following a traffic stop along Washington Street after being captured by law enforcement just after 10 a.m. Wednesday (Courtland Wells/The Vicksburg Post)

A Terry man managed to elude authorities for about six hours Wednesday before being apprehended in the railroad tunnel under Washington Street.

Vicksburg police Lt. Johnnie Edwards said Joseph Wesley Springs, 27, was taken into custody after he was seen running into the tunnel by a Warren County sheriff’s deputy. He was turned over to Mississippi Department of Corrections agents who had issued a warrant charging him with probation violation.

He was taken to Merit Health River Region after his arrest for treatment of a head injury and complaints that his back and leg hurt.

The events leading to Springs’ capture began about 4:45 a.m. Wednesday when a Chevrolet Tahoe containing Springs and a woman were stopped for a traffic violation near the Circle K on Washington Street.

When officers tried to arrest Springs on the MDOC warrant, he ran off through the Circle K parking lot, jumped a fence and ran down a hill toward the casino.

After leaving the Circle K, Springs entered the casino and then ran out through the loading dock area, tossed his jacket, got on the property’s retaining wall and jumped in the river, where he hit his head.

Authorities continued their search until he was spotted entering the railroad tunnel and was arrested about 10:45 a.m.

The woman in the SUV was taken into custody for outstanding misdemeanor warrants.