We’re open: Businesses along flooded river work to get word out 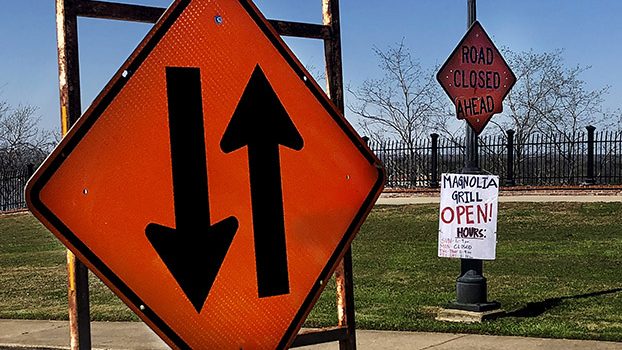 Two signs at the top of the Mississippi River bluff tell the story of Natchez Under-the-Hill business owners and their struggle to let customers know they are open for business.

One bright orange road sign installed by the city more than a week ago says “Road Closed Ahead.”

Posted just below the road sign is another sign made of poster board that says, “Magnolia Grill Open!” The sign was put up by one of the restaurant’s employees, Magnolia Grill owner John Parks said.

“When people see the (road closed) sign, they think everything is closed,” Parks said.

Magnolia Grill and other businesses on Silver Street continue to operate, even as flood waters continue to rise.

The National Weather Service continues to predict a crest of 58 feet on the Natchez gage, but has moved the crest date to March 10, several days earlier than what was originally forecast.

Part of Silver Street, a few yards past Magnolia Grill has been closed off for more than a week, after flood waters covered the street where the Isle of Capri Casino used to operate.

City officials have turned Silver Street from a one-way street into a two-way street for vehicles. Parallel parking on the street has been restricted to allow for the two-way traffic.

Even still, the signs installed at the top of Silver Street can cause confusion, business owners say.

Parks said the sign has helped get the word out about his business.

“Many customers have come in and said ‘I saw your sign,’” Parks said.

In addition to the confusion, Parks said, some people also are concerned about safety.

“Some locals get very concerned when the river starts rising,” Parks said. “As long as that crest stays at 58 and doesn’t go any higher we should be fine.”

Silver Street Gallery and Gifts owner Gail Guido said signs help get the word out, especially when a lot of the news is dominated by the flooding.

Guido said one of the biggest concerns by her customers is that little parking is available.

“Parking is the biggest deal,” Guido said. “Thankfully, the city has not been heavy-handed about monitoring the parking.”

Despite the misconceptions, Guido said the city and businesses owners are dealing with the situation the best they can.

“We are still getting customers, but not as much,” Guido said.

For the last few days work crews have been constructing flood barriers along the riverfront to keep the water from spilling onto the main access road.

“We have our Hesco baskets and AquaDam up protecting our parking and main entrance,” Preston said.

The casino, Preston said, continues to learn how to better protect the facility each year it floods.

“Each year, I think we get a little better understanding where we need to place those barriers, but as you know this river is no joke.”