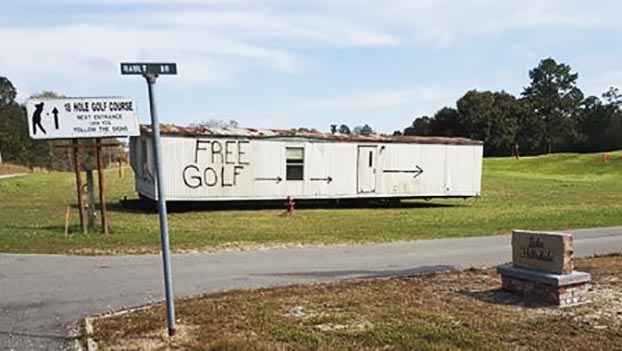 This trailer sits at the entrance of Lake Hillsdale, marking the way to “Free Golf,” placed there by property owner Mark Gibson. Photo by Jeremy Pittari

Leaders of a Mississippi county are scratching their heads trying to figure out a way to force a man to remove two dilapidated house trailers he placed on his property near the entrance to a lake subdivision in an attempt to lower property values.

The Pearl River County Board of Supervisors voted Monday to “condemn” property owner Mark Gibson for placing what were referred to as “two old raggedy trailers” on property at the entrance to Lake Hillsdale.

Holliday further called the placement of the trailers an act of “intimidation” against the residents who live there and referred to Gibson as “a bully.”

The Board further authorized attorney Joe Montgomery to start “any and all actions of legal means” by which the Board can remove the trailers and hold Gibson responsible for any damages incurred in the event the trailers are not moved by March 6.

When reached by phone Monday afternoon, Gibson said he had not yet received any notice from the Board or its attorney.

Gibson maintained he is a “law abiding citizen and follows the letter of the law.”

“I am sure we will take appropriate action when we receive whatever information they send me,” he said.

Gibson said he has been unsure what to do with the property in question, but said he placed the trailers there because he thought he might need office trailer space “for construction projects we’re going to start up that way.”

One trailer, facing the roadside as motorists exit I-59 toward the entrance of Lake Hillsdale, has the words “Free Golf” and a series of arrows pointed to the entrance of the subdivision spray painted on the side.

Gibson said the markings are a “marketing tool” for the subdivision’s golf course “which hasn’t done any business in a long time.”

“I own it,” he said referring to the golf course. “I can’t give away something I don’t own.”

Mel Hunsinger, president of the Lake Hillside Property Owner’s Association, said the golf course belongs to the POA and shares Holliday’s sentiments about those trailers.

“They are a horrible sight,” he said. “They should not be there.”