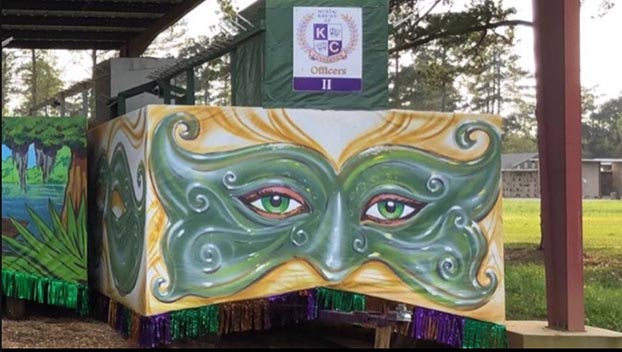 A Mississippi man stole a Mardi Gras parade float two days before it was to roll in a New Orleans suburb, authorities said.

In a news release, the St. Tammany Parish Sheriff’s Office said it obtained a warrant Friday to arrest Orlando Lyons, 49, of Biloxi on a felony theft charge.

“Lyons claims he rented/bought the float, but he has yet to meet with detectives or provide any evidence to support his claims,” according to the news release.

It was not clear if Lyons has an attorney who could comment, and directory assistance does not have a listing for him.

The 25-foot-long (7.6-meter-long) float was among several stored at the Covington Lions Club.

The group reported the theft Monday, and the sheriff’s office asked its Facebook followers, “Have you seen this float ?”

The accompanying photograph showed a low rectangular “hay-wagon-style” float with a design of giant green masks and a box at the top emblazoned with a coat of arms and the word “Officers.”

A relative of Lyons called that day to say Lyons had asked for help with the float, and it was at the relative’s house in nearby Slidell, Friday’s news release said. It said Lyons had taken it Sunday evening, planning to tow it to Biloxi, but his vehicle broke down.

Detectives have been talking by telephone with Lyons, asking him to meet with them, the sheriff’s office said.