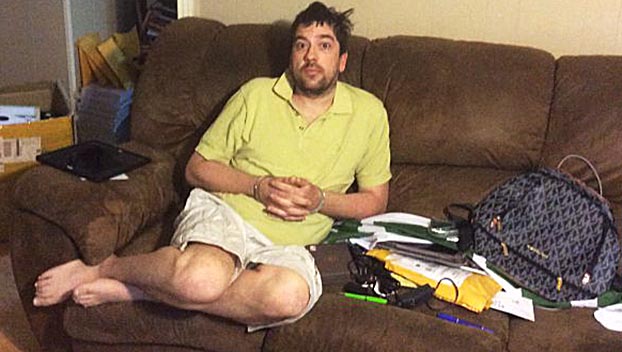 Russell W. Haynie, 45, a native of Stantonville, TN, pleaded guilty in Alcorn County Circuit Court to one count of possession of counterfeit goods with intent to distribute. Alcorn County Circuit Judge John R. White sentenced Haynie to serve five years in the custody of the Mississippi Department of Corrections with two years suspended and leaving three years to serve.

Judge White ordered Haynie to pay $1,000 in fines in addition to AG investigative costs. Haynie pleaded guilty last November in federal court to trafficking of counterfeit goods and received a federal sentence of 32 months, which he must serve day for day. Additionally, Haynie must pay $152,930 in federal restitution for Louis Vuitton products and $167,295 for Michael Kors products. The state and federal sentences will be served concurrently.

Haynie and a second defendant were arrested in September 2016 at their Corinth business, Discount Wallet Outlet. The joint investigation by the Department of Homeland Security, the Corinth Police Department and the Attorney General’s Consumer Protection Division uncovered more than $1.5 million in counterfeit goods and coins the defendants were selling to the general public from their store and online.

Haynie was arrested for the second time in September 2017 at his home by investigators with the Attorney General’s Consumer Protection and Cyber Crime Divisions, where investigators found over $2 million worth of counterfeit goods. Items discovered included Yeti-brand products, Life Proof and Otter Box phone cases, Ray Ban sunglasses, Beats by Dre, and Apple and Bose products.

“We have formed strong partnerships with state and federal agencies through our Knock Out Knock Offs Task Force, and this case demonstrates there is a higher price to pay when you are caught selling counterfeit goods in our state,” said General Hood. “We extend our thanks and appreciation to all of the participating agencies in this case for their dedication and hard work. Selling or buying counterfeit goods poses serious health and safety risks to consumers, not to mention loss of revenue to businesses. You won’t get away with it in our state.”

“Criminal networks are working daily to fool the public with illegally imported counterfeit goods they use the profits from to fund other large-scale criminal activity,” said Jere T. Miles, special agent in charge of Homeland Security Investigations New Orleans. “The same criminal groups behind counterfeit luxury goods also sell counterfeit medical devices, and safety items such as car airbags, that directly threaten public safety for profit. HSI will continue to work with the attorney general and other law enforcement partners to identity and prosecute these criminal enterprises, and to defend legitimate businesses that pay taxes, employ workers and contribute to the health of the legitimate economy.”

William C. Lamar, U.S. Attorney for the Northern District of Mississippi, said, “Late last year, Russell Wayne Haynie was convicted and sentenced in federal court for importing and trafficking over $1,000,000 in counterfeit designer brand goods mainly from China. Trafficking in counterfeit goods not only causes tremendous damage to the legitimate manufacturers and businesses but also damages consumers who are not receiving the safe quality goods they believe are authentic. This is also another example of federal and state authorities working together for the good of the people of the State of Mississippi.

In addition to the assisting agencies, this case was investigated by Lee McDivitt and prosecuted by Special Assistant Attorney General Patrick Beasley, both of the Attorney General’s Consumer Protection Division.