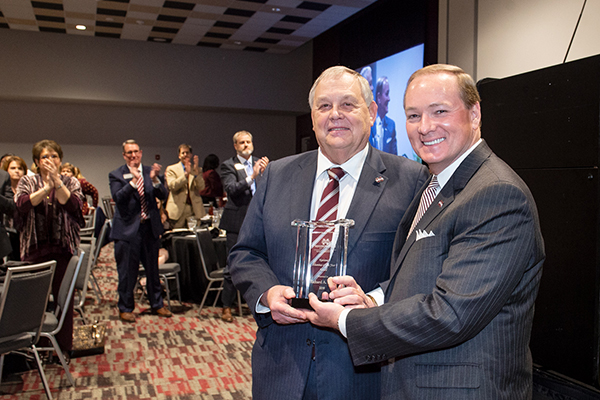 For five decades, Richard Rula has bled maroon and white.

Now, the Vicksburg native holds the honor as Mississippi State University’s National Alumnus of the Year.

Rula was recognized as the university’s top alumnus during campus ceremonies in Starkville where he was honored during the MSU Alumni Awards banquet.

Rula and his wife Sherry, also a Vicksburg native, have a deep connection to the River City. The couple, who have been married for 47 years, are graduates of H.V. Cooper High School.

Her father, former mayor John D. Holland, is credited for attracting the Miss Mississippi Pageant to Vicksburg in 1958 after first being elected in 1957. He remained mayor until 1968.

“I come back all the time,” Sherry Rula said. “We still go back and Richard has jobs there.”

She said her husband was very surprised about being chosen by MSU as the national alumnus of the year when he got the call in December.

“He didn’t even believe it when they called him. Richard said ‘What?’ He couldn’t believe and it took Richard the length of a phone call to understand what he was saying. He was very surprised, but I think he deserves the honor very much.”

Rula, the son of the late Adam and Anna Rula, earned his bachelor of science in civil engineering from MSU in 1970. He has enjoyed success in the construction industry and received the Lifetime Achievement Award from the Associated General Contractors of America for his accomplishments. He holds a professional engineering license and is a member of the Society of Civil Engineers.

Following progressive roles, Rula became owner and president of the company in 1984. Since then, he has led the small, locally based construction company into a prosperous firm well-recognized throughout the southeastern United States. The multi-faceted contracting company is licensed to perform work throughout the region involving heavy and highway construction, utilities, and commercial and industrial site development.

Rula also is the proprietor of Suncoast Infrastructure Inc., a leading trenchless contractor, and Maintenance Systems Inc., which focuses on operations and management of water and wastewater treatment plants.

Rula earlier was recognized by Mississippi State as the James Worth Bagley College of Engineering Alumnus of the Year for 2017 and a Distinguished Engineering Fellow in 2006.

A love for MSU

An active volunteer at his alma mater, Rula serves on the Bulldog Club board, MSU Foundation board, and the Bagley College dean’s advisory council. Beyond MSU, Rula has served on the boards of the Kidney Foundation, Madison County Association, and the Tennis Foundation of Mississippi.

At Mississippi State, Rula’s cornerstone contribution is helping make possible a new 70,000-square-foot, state-of-the-art facility under construction to house the Department of Civil and Environmental Engineering; classrooms and offices; teaching, research and chemistry labs; and high bay areas for the Bagley College. In his honor, the facility will be known as the Richard A. Rula Engineering and Science Complex.

In athletics, his philanthropy includes the Mize Pavilion’s Rula-Dampier Courts for men’s and women’s basketball practice. A planned indoor facility for Bulldog tennis also will benefit from his support.