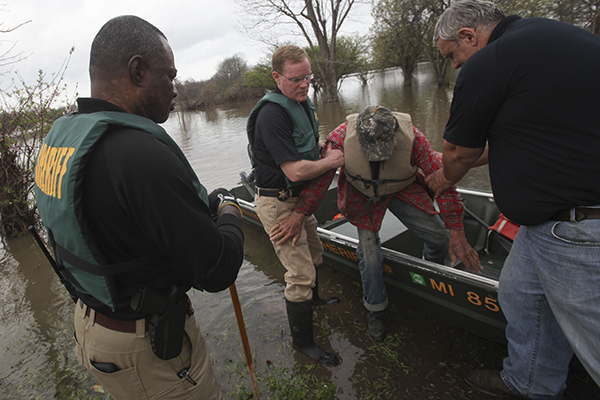 Warren County Sheriff Martin Pace and Reed Birdsong with Warren County Emergency Management help a man from a boat after assisting him with evacuating from his home that is inundated with floodwater off of Floweree Road in Redwood, Miss., Wednesday, March 13, 2019. Sheriff Pace said they were alerted by neighbors that there was a man alone and found his home surrounded by several feet of water with no vehicle or boat. (Courtland Wells/The Vicksburg Post)

Warren County authorities used a boat to rescue an elderly man whose house off Floweree Road was surrounded by floodwaters.

Sheriff Martin Pace said the man’s neighbors told the sheriff’s office that he was still in the home and did not have a vehicle or a boat. Pace said the man was living in a small wood frame house about one-half-mile south of Floweree Road in an area affected by backwater flooding.

Pace, deputy Lt. Sam Winchester and Reed Birdsong from Warren County Emergency management used the boat to get to the man’s house and bring him to safety. Pace said Vicksburg Fire Department paramedics accompanied him and Winchester in case the man, who was not identified, was injured.

The man, he said, was all right.

“The water was not in his house yet,” he said. “The water was up to the level of his porch and still rising. He was doing quite well, but he was just completely stranded. We gave him a ride and he is in a safe place in Vicksburg and we will take him back to his place when the water recedes.”

Pace said if anyone knows of someone trapped in their home by water to contact 911 or the Warren County Sheriff’s Office at 601-636-1761.

“We’re checking as best we can with door-to-door and boat patrols but there may be people who have chosen to stay, and now found themselves unable to get out.”

He said deputies are continuing boat patrols west of U.S. 61, including flooded areas inside the Vicksburg city limits, and multiple deputies have been assigned to the Eagle Lake and Brunswick areas.

Emergency Management Director John Elfer said Wednesday he would like to “clear up any misunderstanding concerning access to Eagle Lake.”

“The elevation in the lowest spot on Highway 465 between Highway 1 and the levee is approximately 97.5 feet,” Elfer said. “MDOT understands how important this route to Eagle Lake is and have indicated that they will do everything they can to keep the road open; however, if for some reason based on water levels this road is closed, there is no other public travel route to the Eagle Lake community.

“The decision to close state highways is determined by MDOT. Travel routes on levee roads and decisions to close those routes are levee board decisions. We would like everyone to understand that these backwater levels are extremely difficult to predict and we want the public to be prepared in the event these travel routes become compromised.”