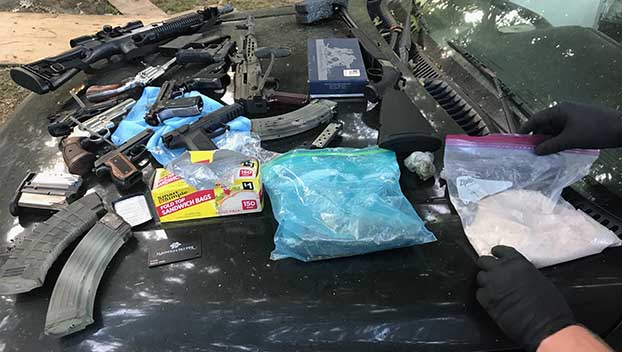 A suspect who was arrested in Mississippi last June in a drug and gun case has been indicted by a federal grand jury and is being held in the Madison County Jail, law enforcement officials said.

“As officers searched the property,” Patten said, “they opened the trunk of a Dodge Charger — which Ward had the keys to in his pocket — and discovered a cache of weapons, approximately 1.1 pounds of methamphetamine and a small amount of marijuana.”

“All of the weapons,” Patten said, “were found wrapped in blankets under the methamphetamine. Ward is a convicted felon and is not allowed to be in possession of any weapons.”

Patten said the case was turned over to the U.S. Bureau of Alcohol Tobacco and Firearms to present to the United States Attorney’s Office for prosecution.

Ward was indicted by a federal grand jury on Feb. 21, Patten said.

“On March 13, 2019, the US Marshal’s Service came and transported Boris Ward to the Madison County Jail until he can be arraigned by a Federal Magistrate on the charges in the indictment on March 18, 2019,” Patten said, adding he hopes more such cases will be prosecuted.

“Ward is just the first person from a list of people that has been submitted to the ATF for prosecution,” Patten said. “The Adams County Special Operations Group is working with every agency that it can on both the local level and the federal level. We are using every resource that we have available and will continue to do so. These criminals are not bound by city, county or state jurisdictions, and we have to continue to work with outside agencies to apprehend these people engaged in criminal activity.”