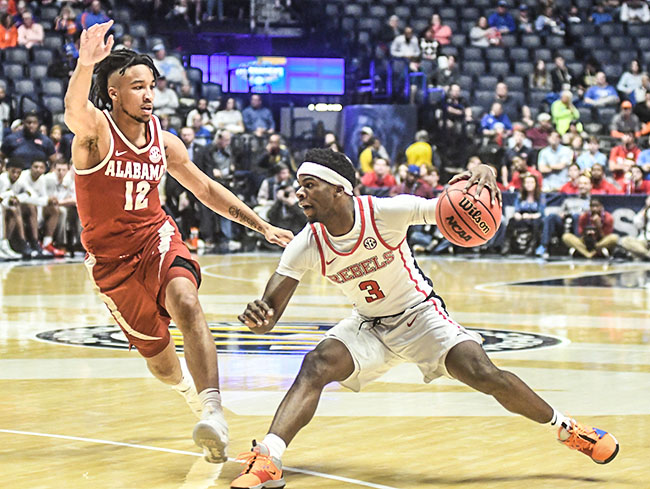 NASHVILLE – Trailing by 14 points at the halftime buzzer, Alabama needed just seven minutes to close the gap. Ole Miss was able to sustain the Alabama run, playing a hotly contested final eight minutes of basketball before Alabama pulled the game out late.

Winning 62-57, Alabama will advance to the third round of the SEC Tournament.

“We settled and settled and settled and those guys put it right in the paint. Give Alabama credit, they played like an NCAA Tournament team tonight,” said Ole Miss head coach Kermit Davis. “The starts of second halves have been bad for us the last eight or ten games. We hit a jump shot and went up 16 and then we only scored 17 the rest of the game.”

Alabama was largely careless with the ball for many possessions early in this game. Ole Miss had a number of straight run-out layups off of careless Alabama passes. In the first half, Alabama turned the ball over 10 times, leading to 14 Ole Miss points.

Ole Miss did just about everything well in the first half game, except some of the most predictable and best parts of their game. Everyone was shooting, even Dominik Olejniczak hit a 20-foot jumper from the elbow.

However, where the first half was just about the most balanced and dominant the Rebels have looked all year, the second half was quite the opposite. Alabama consistently cut into the Ole Miss lead in the opening minutes, erasing the 14-point halftime deficit in just over seven minutes with a 20-5 run.

“We just played some gritty, hard nosed man to man. Our fitness and our energy level was really good, defensively, in the second half,” said Alabama head coach Avery Johnson.

Ole Miss’ offense that flowed so effortlessly and efficiency over the opening 20 minutes of play stagnated coming out of the half. The Rebels hit just 4 of their opening 16 shots and 1 of 8 three in the opening 11 of the second half. Spirits seemed to shift after Terence Davis ran off two baseline screens, burying an open three to give the Rebels a 51-48 lead at 8:15 to play.

The Rebels would hold a slight lead from most of the way after Davis’ three, before Alabama’s Kira Lewis Jr.’s layup with 1:26 to play tied the game at 57. Davis would turn the ball over on the next possession, leading to an Alabama dunk to go up 59-57. Ole Miss was unable to execute offensively in the final minute, and Alabama hit just enough free throws to hold on to a 62-57 win.

Strangely, the two most consistent part of the Ole Miss offense all year – the SEC’s second leading scorer Breein Tyree and free throw shooting – were nonexistent against Alabama.

Tyree scored just 7 points and did so in the most inefficient of ways, leading the team in shots. He shot 3-16 from the floor and 1-8 from three on the night. The team shot no free throws in the first half and went just 2-4 in in the second half. When Alabama made their second half surge, and everyone stopped hitting every jump shot, lacking your bread-and-butter became more problematic.

“When our two All-League players stopped shot-making they quit guarding,” Kermit Davis said. “I saw it coming with Breein (Tyree). Yesterday in practice, he wasn’t very good here. He didn’t guard… When shot-making effects effort, that’s when it bothers you.”

“I played the worst game of my career. I let my team down. That’s a team game but I’ve got to do better, period,” Tyree said. “I just quit on possessions. Easy layups. Uncontested. I dug my team too fair in the hole and we couldn’t get out.”

Lost in the shuffle of the Alabama comeback is just how good the Ole Miss defense was in this game. They held an Alabama team averaging 72.6 points a game to 62.

Alabama will play No. 4 Kentucky in the third round of the SEC Tournament on Friday night at 6 p.m.