Just in nick of time: Firefighter returns from overseas duty just in time for son’s birth 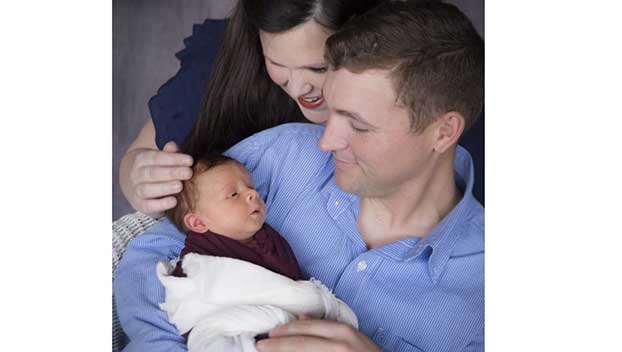 Hoggard is with the Mississippi Army National Guard 2nd 114 Field Artillery in Winona.

He has been home since Feb. 9, two days before his son, John Riggs Hoggard, was born. “He held out for me,” the firefighter said.

Hoggard was deployed in June of 2018 and his wife Bethany kept him apprised of the pregnancy through the amazing world of technology via Facetime.

Though John is glad to get back to the fire department, he will miss being with his new son.

While deployed, he said he missed his wife the most.

“I missed my family. It was hard, a lot harder than I thought it would be for that long,” he said.

Hoggard did not go into detail of where he was stationed or what he did, but he said he and the other military service men and women felt the love from back home.

He said every soldier got a Christmas present from somebody in the U.S. that was not their family. “I feel like people still care. It seems like everybody’s family was taking good care of them. Walmart sent us stuff. We got Christmas presents from people we didn’t even know.”

While he was away, Bethany was around support groups for military families. She would go to some of the briefings in Winona.

“Some I went to high school with. It has been good to reach out to them. Just knowing that somebody else understands what you are going through is pretty awesome,” Bethany said.

She learned that communication was incredibly important. This was their first time to be separated by deployment and it was hard on both of them.

“He tried to be there as much as possible. I learned to step in and take on some of his roles while he stepped away. It was kind of hard but I am very grateful to hand them back to him,” she said.

John has been with the fire department since December of 2016. He believes his military role helps him to be well-rounded as a firefighter.

He is ready to get back and continue his role of helping educate the community on fire prevention that he was doing before he left.

“I believe it’s working. Fires are down as far as I can tell while I was away. We can continue with our fire prevention. I think our community outreach has helped out a lot, especially for our children. So they grow up knowing about fire prevention. It helps them when they get older,” he said.

Batesville Fire Chief Tim Taylor said he is “exceptionally proud to have him back safe and sound. “

“We know he made a sacrifice. If it was not for people like him, we wouldn’t have the freedoms we have today. He will be welcome back with open arms. All the guys are crazy about him,” he said. “We sent him care packages which he was over there because he was still a Batesville fireman as far as we were concerned.”

Bethany is the daughter of Mike and Rhonda Roberson of Pontotoc. John is the son of Laurie Boyd and Robert Hoggard.

This article was originally published in The Panolian newspaper