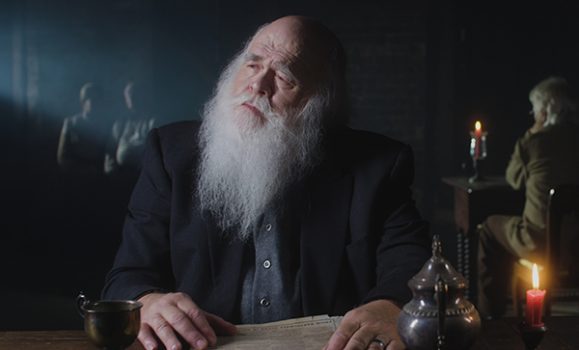 Vicksburg resident Robert B. Jones portrays a Southern gentleman in Travis Mills’ upcoming film “Son of a Gun.” The film will be screened at 7 p.m. March 23 at the Strand Theatre, 717 Clay St. (Submitted/The Vicksburg Post)

Fables and folklore circulate throughout the historical town of Vicksburg, but there is one that seems just plain outlandish.

Nonetheless, independent filmmaker Travis Mills will bring this incredulous tale to life in “Son of a Gun,” which will be screened at the Strand Theatre March 23.

“If you don’t know about the bullet pregnancy, you need to visit the courthouse museum in town and see their display,” Mills said.

“Basically, it involves a bullet that passes through a soldier’s private parts and wounded a young girl in the womb, hence impregnating her,” he said.

Mills, who is the co-founder of Running Wild Films, began filming in Arizona, but expanded his endeavors to Mississippi with films including “Porches and Private Eyes,” “Blood Country” and “Cornbread Cosa Nostra,” which is based on true events surrounding the Dixie Mafia on the Mississippi Gulf Coast.

For his next undertaking, Mills said, he was interested in finding a Civil War romance story when he came across the “bullet pregnancy myth.”

“This obviously wasn’t the kind of romance tale I was expecting, but as soon as I discovered that this myth was told by a doctor in Vicksburg named Legrand Capers, I was hooked. I could then see the central character and how to make a full length film of this story.”

“I was cast as a Southern gentleman,” Jones said.

“I have always been a movie buff and when I saw there was going to be a casting call at the Strand Theatre, I told my wife I was interested in checking it out, since being in films is something I have always wanted to do.”

Jones, who has a long white beard and has played Santa Claus around town, said he “loved” working with Mills.

“It was a great experience. One I will always remember and Travis knows how to work with people with no experience,” Jones said.

“I love working with people who have never been in a movie before,” Mills said.

“First of all, it’s great to provide that opportunity because they’re most likely not going to get a good speaking role in a big movie until they get one in an independent film like mine. Second, it’s a thrill to watch them go from zero to sixty in a matter of takes. You can see the improvement and confidence building right before your eyes and it’s quite fulfilling,” Mills said.

While most of the film was shot in Port Gibson, Mills said, some key scenes were shot in Vicksburg at the Railroad Depot Museum.

“They were great to help us out,” Mills said. “We also filmed on private property in Vicksburg for the ‘tree of surrender’ historical moment in the film and the film’s final scene.”

Mill said because “Son of a Gun” is such an uncanny story due to its subject matter, he had the opportunity to touch on several subject matters that he has been eager to bring to light.

“I saw the opportunity to explore several themes that interest me, such as the nature of storytelling, how close the line is between truth and a lie, and also to explore a time when our country was as divided as it is now,” he said.

Screening for “Son of a Gun will begin at 7 p.m. Admission is $10 in advance at brownpapertickets.com and $15 at the door.

In addition to Mills, some of the actors in the film will be on hand for the screening and afterwards will be available for questions.