Oklahoma too much for Rebels, Ole Miss one and done, headed home after NCAA tournament opener 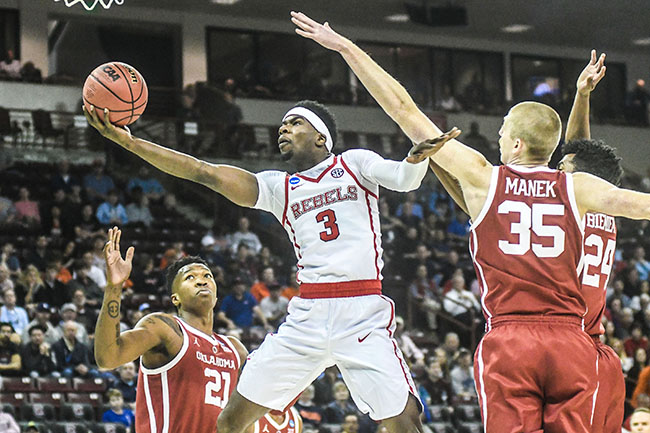 COLUMBIA, S.C. – Nothing went right for Ole Miss on Friday. Falling behind early in their NCAA Tournament opener against Oklahoma, the Rebels were never able to recover. Oklahoma ran Ole Miss out of the building from the start, winning 95-72 to advance to the round of 32.

“Obviously it was a pretty disappointing day for our team,” said Ole Miss head coach Kermit Davis. “Right from the start they out classed us. They out toughed us and they did it in every area. So give Oklahoma a lot of credit.”

Ole Miss could not have started the first half any worse. They looked tight the start the game, and their lack of NCAA Tournament experience showed early. The Rebels couldn’t defend Oklahoma to start the game and they couldn’t score. Kermit Davis had to burn a timeout just 1:20 into the game, and Oklahoma jumped out to a quick 12-0 lead before Ole Miss even got on the board.

The trio of Ole Miss guards in Breein Tyree, Devontae Shuler and Terence Davis got going after the slow start, but were unable to slow down the offensive pace of Oklahoma. Oklahoma opened the game 13 of 17 from the floor, scoring 32 points in the opening 10 minutes of play.

Defensive breakdowns were commonplace in the first half for Ole Miss, and Oklahoma also hit a lot of tough shots. Leading by as much as 22 points in the half, Oklahoma shot 57.6-percent and 4 for 6 from three to open the game.

“It just seemed like we wouldn’t contest a shot,” Kermit Davis said. “We would guard and our hands were down. It was so easy for them.”

Coming into Columbia, the most the Rebels had allowed in a half of play was 43 points at home to Iowa State. Oklahoma crested that mark with over four minutes remaining in the half and the Rebels went to intermission trailing 50-33.

The Rebels came out of the half shooting well, making six of their first nine shots, cutting the Sooner lead to as little as twelve. However, they simply weren’t able to defend at a level needed to beat an average team, let along an NCAA Tournament caliber team.

Oklahoma would settle in to the second half right where they left off in the first. Following the moment Ole Miss cut the lead to 12 points at 50-38, the Sooners went on a 20-12 run to put the game essentially out of reach for the Rebels.

“We did make a pretty good run to start the half. Coach was trying to tell us at halftime just get it down to a manageable game and see what happens,” Tyree said. “They were just making shots and making plays.”

Merely looking at the Ole Miss shooting numbers, it resembles a standard game in which they would have won on the year. The Rebels shot 46.8-percent from the field and 35.5-percent from the three-point line – good offensive numbers. They even rebounded the ball decently for a team that has struggled at times doing so – like when they were bounced from the SEC Tournament by Alabama after being outrebounded by 20. Ole Miss lost the rebounding game, but did so only by one.

Simply put, the game came down to an inability by Ole Miss to defend. The hot shooting by Oklahoma carried into the second half, as they would shoot 57.6-percent on the game as a whole. The 95 scored by Oklahoma was the most the Rebels have allowed all year. It’s hard to win games when your opponent is scoring that easily.

It’s worth noting that this Ole Miss team was not supposed to be good. A season after going 12-20, the Rebels were picked to finish dead last in the SEC. Instead, Ole Miss won 20 games, making the NCAA Tournament for the first time since 2015. Regardless of the outcome today in Columbia, this season should be considered a success for Ole Miss.

“This is not going to define who we are. Based on taking over the program and how much progress we have made in a year,” Davis said. “Obviously we didn’t play the way we wanted to today. But to be with this group the whole year, I’m extremely excited about our future.

Oklahoma will take on Virginia in the round of 32 on Sunday. Kermit Davis’ inaugural season at the helm of Ole Miss basketball ends with a first-round exit in the NCAA Tournament.