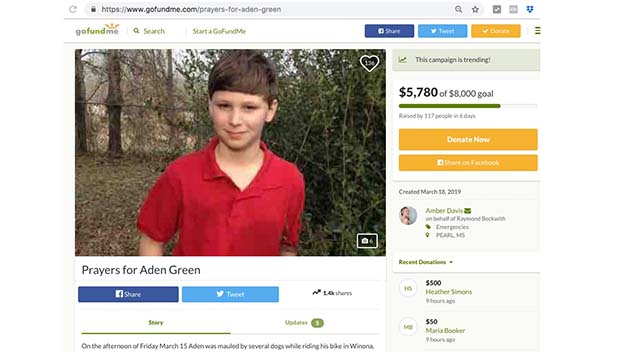 Family and friends of the young Mississippi boy who was viciously attacked by a pack of dogs report he continues to need serious medical treatment, but shows some signs of improvement.

Updates posted to a Go Fund Me page which aims to raise funds for 12-year-old Aden Green indicate he was still heavily sedated as doctors work to clean and treat his wounds.

“He’s opening his eyes more and more and seems to be handling being awake better as time goes on,” the family posted to the Go Fund Me site.

On Sunday he remained on a ventilator, but the family wrote that doctors may remove it soon and replace it with a tracheostomy.

“Once they don’t have to clean his wounds every day they’ll discuss starting physical therapy,” the family lwrote. “He’ll have weeks of PT in the hospital and then will continue more PT after he goes home.”

The extent of the muscle and nerve damage to his legs is not known yet, the family reported.

Green was put into a medical induced coma a little more than a week ago after six dogs attacked the boy while he rode his bike in his hometown of Winona.

The dogs ripped him from his bike and dragged him into a ditch before a man and his son who were passing by and saw the attack stopped to help. The father and son used boards and hammers to beat the dogs away and stop the attack.

Green was taken by helicopter to the Blair E. Batson Children’s Hospital in Jackson where he is still being treated.

The dogs were captured and euthanized, but says their owner won’t face charges because Montgomery County doesn’t have rules regulating dogs in areas outside city limits.

To make a contribution to his family for medical care costs, visit:
https://www.gofundme.com/prayers-for-aden-green