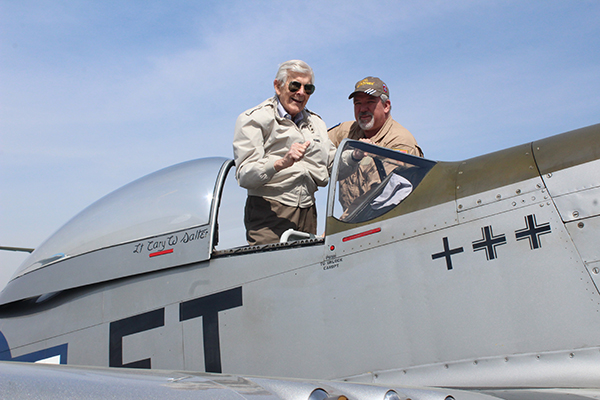 Air Force veteran Jack Buchanan of Jackson gives a “thumbs up” signal from the cockpit of Charlotte’s Chariot II before being helped into the rear passenger seat by Dan Fordice. A Vicksburg native, Buchanan was invited by Fordice to fly in the plane. (John Surratt/The Vicksburg Post)

A 1941 graduate of Carr Central High School, Buchanan went through flight training at Craig Field in Selma, Alabama. “I flew the P-40, the P-51 and the AT-6,” he said, adding he was recalled to the service in the 1950s after graduating from Mississippi State and was assigned to Okinawa, where he few the F-86 Sabre jet fighter.

He commanded a squadron of RF-4C Phantom jets at Alconbury, England, and was later sent to Vietnam, where he flew combat missions, retiring as a colonel in 1973.

Buchanan, who now lives in Jackson, said it was an invitation from Southern Heritage Air Foundation founder Dan Fordice that got him back in the cockpit.

“It’s a whole different feeling, but I enjoyed it. Once I heard that engine, the memories came back.”

Buchanan was one of many people who visited the Vicksburg-Tallulah Regional Airport in Mound Saturday to look at war birds and civilian aircraft on display, enjoy crawfish and hamburgers and possibly get a ride in the P-51, one of three AT-6 Texan trainers, or a Stinson L-5, a small aircraft that filled multiple roles in World War II.

The “Spring is in the Air” event was a fundraiser for the museum to help keep its planes flying.

The Stinson was the plane of choice for two program visitors, John Ledlow of Vicksburg, and 9-year-old Lacey Thrash of Newton, who each went a round in the small aircraft. Lacey’s flight was her first.

Lacey said she decided to fly, “Because I thought it would be fun.” But it was hard to tell whether she would have any fun as Fordice began explaining to her what makes an airplane fly.

As Fordice moved around the plane and demonstrated how the rudder and ailerons moved, Lacey’s eyes began to get big and her face showed a lot of surprise. But when Fordice asked her if she wanted to get in, she smiled, nodded her head and crawled in the rear of the Stinson.

She waved to her family as the plane began to taxi to the runway.

When she returned, she confirmed her initial reason for getting in the airplane.

“It was fun,” she said, adding she took nine pictures while up in the air that no doubt were shared with friends Monday at school.

She also said she saw a lot of water, and the cars on the road “looked like ants.”

“I really liked it,” she said.

Ledlow, who served in the Air Force and flown in other planes, including a T-37 Air Force jet trainer, said it had been a while since he had flown.

“I saw a whole lot of water,” he said. “It’s a different perspective when you see things from the air than when you’re driving on the road. I enjoyed it.”

“This has been a very good day,” Southern Heritage Air Foundation president Patty Mekus said. “It’s gone pretty smoothly. We sold out the rides on the L-5, sold two rides in the AT-6, and we had a World War II vet fly in the P-51.

“We had hoped to have more planes here, but there was just too much going on, but we’ve had people walking around all day looking at the planes and having a good time.”