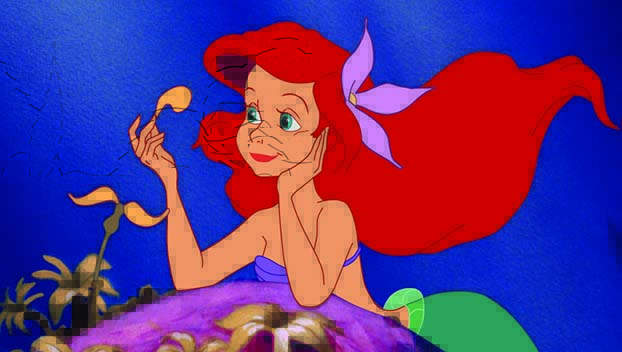 It’s not uncommon for people to just look at Jodi Benson and burst into tears.

Sometimes they hyperventilate or scream. But mostly they break down and start sobbing. Benson will hold them, heaving in her arms, and pat their back gently.

Benson isn’t a household name but for many she’s an intimate part of their childhood. She supplied the singing and speaking voice of Ariel, the heroine of the 1989 animated Disney hit “The Little Mermaid,” which is celebrating its 30th anniversary this year.

Benson says she will sometimes watch as the stunned movie’s fans virtually go back in time in front of her. “It triggers a memory for them,” she says.

“The Little Mermaid ” has changed a lot of lives, not least of which is Benson’s, who has continued to perform Ariel virtually every weekend in concerts as well as on film in the “Wreck-It Ralph” franchise.

“The Little Mermaid” also had a big role in making Disney into an animation juggernaut and reviving the art form. Many believe we’d never have Anna and Elsa from “Frozen” without first having Ariel.

“Disney was starting to get into a groove that would continue, but I feel like a lot of that started with ‘A Little Mermaid,'” says Ron Clements, who co-wrote and co-directed the film.

Benson was a rising Broadway star when Ariel came into her orbit. She had been in a short-lived musical “Smile” when Howard Ashman, the musical’s lyricist and story writer, invited the out-of-work cast to audition for his next project, an adaptation of Hans Christian Andersen’s “The Little Mermaid.”

Producers wanted the singing and speaking voice to be supplied by the same actress. So Benson, a lyric soprano, sang the signature “Part of Your World” on a reel-to-reel tape and was handed a few of pages of dialogue.

“I ran into the ladies’ room,” she recalls “and waited for everybody to get out of the stalls and started talking to the mirror, sort of trying to come up with what would she sound like at 16.”

Benson, it turned out, was a master mimic. She had spent countless hours in her room as a child with her guitar, singing along to records by Barbra Streisand, Carole King, James Taylor as well as Marvin Hamlisch’s “A Chorus Line.”

“I would start to just sing like them. But it wasn’t like I was trying to be them. It’s just that’s what I heard. And so that’s just what you do. You just sound like what you been listening to,” she says.

A year or so after auditioning for Ariel, she got the call that she’d won the role. “I completely forgot that I had auditioned,” she says. Back then, voiceover work wasn’t very glamorous and big celebrities wouldn’t consider it.

“It wasn’t a good job. Doing voiceovers was what you would do when your career was on the back half, when it was tanking,” says Benson. She thought Ariel would be just another notch on her resume. It was not.

Propelled by such Alan Menken songs as “Under the Sea” and “Kiss the Girl,” the film won two Grammys and earned three Academy Award nominations. It was critically acclaimed, with Roger Ebert calling it a “jolly and inventive animated fantasy,” and would go to earn $211 million worldwide. Parents of children with learning disabilities have told Benson their child’s first words were from the film.

A live-action remake is in the works, featuring new songs by Lin-Manuel Miranda, who created “Hamilton.” He loved the 1989 animated film so much its partly the reason he named his first child Sebastian — the mermaid’s crab friend.

It was the kind of hit that Clements and his animators at Disney had long been hoping for. He had started at Disney in 1974 and was part of a new generation of artists trying to change the notion that animation was just for kids.

Clements had pitched a two-page treatment of the musical to then-studio head Michael Eisner and was given the green light. For Clements and his partner, John Musker, the stakes were high: It was the first fairy tale Disney had done for some three decades.

“There was a feeling — all through ‘Little Mermaid’ — that this film had potential to be the film that could break through and work the way we were all hungry for and hoping for,” recalls Clements, who went on to co-direct “Aladdin” and “Hercules.”

“It was really, really gratifying that it did break through. It broke through the stigma that animated films were just for kids. It became a date movie. People started taking Disney animation seriously again.”

Over the past 30 years, Ariel has become the bridge between classic princesses like Cinderella and Sleeping Beauty and modern ones like Mulan and Merida. And Benson has become the official Ariel ambassador, tapped to do sequels, video games and shorts, in addition to voicing other characters like Barbie in the “Toy Story” franchise.

Her arms are always open to fans and she’s now welcoming the fourth generation to “The Little Mermaid.” So feel free to cry on her shoulder.

“It doesn’t feel like a job. It just feels like a way of life more than more than anything else,” she says. “You have this multigenerational moment that families can share together. And I get to be a small piece of the puzzle of their story.”

Are your First Amendment protections under attack?