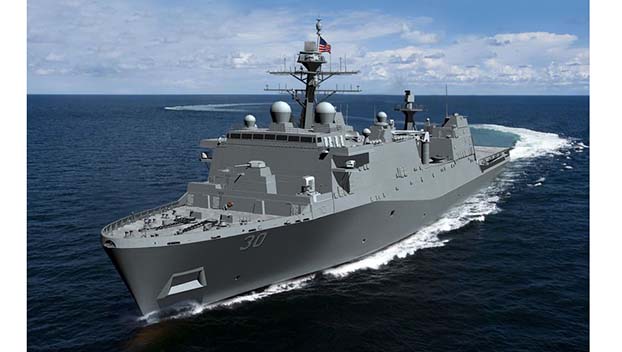 The U.S. Navy has awarded a $1.47 billion contract to a Mississippi shipyard to build a new amphibious warship, following through on a plan announced last year.

The money will go to Ingalls Shipbuilding in Pascagoula to design and build the 14th in the San Antonio class of amphibious transport dock. The ship will be the first with a modified design following 13 earlier ships. Ingalls has delivered 11 of those and is building two more to launch in coming years.

The vessel will be used to carry Marines and their equipment around the world, putting them ashore with landing craft or amphibious assault vehicles. The ship will also be able to host helicopters or tiltrotor aircraft such as the MV-22 Osprey.

Ingalls is a unit of Huntington Ingalls Industries of Newport News, Virginia, and has 11,500 employees. Tuesday’s award will provide them work in coming years.

“The LPD Flight II builds upon the significant investment that has been made in this platform to improve the capability and flexibility of our deployed Navy-Marine Corps team,” Ingalls President Brian Cuccias said in a statement . “LPD 30 will leverage a hot production line and further benefit from the investments we continue to make in our shipbuilders and facilities.”

The company said it plans to begin building the ship in 2020.

The shipyard on the Pascagoula River has built nearly 70 percent of Navy warships now afloat and has been spending hundreds of millions of dollars on modernization and expansion. That includes more than $150 million in aid in recent years from the state of Mississippi, which owns most of the shipyard and leases it to Ingalls. The company also plans to restore a shipyard on the east bank of the Pascagoula River that was destroyed by 2005’s Hurricane Katrina.

The Navy said work is expected to be completed by February 2025. The Pentagon is obligating $1.37 billion toward the project that won’t expire at the end of the current budget year.