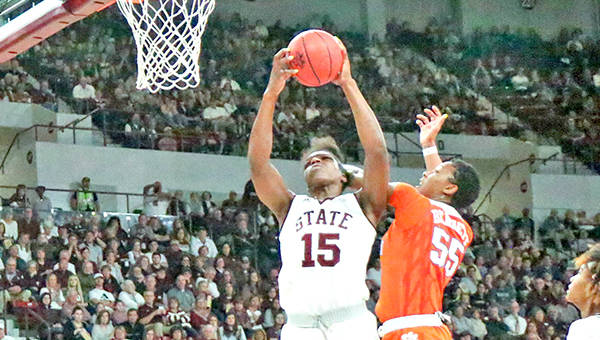 Teairia McCowan added another line to her impressive resumé on Monday when she was named a first-team Associated Press All-American.

It’s a nice honor, but no replacement for the one she wanted most and will never have — national champion.

McCowan was lauded for her individual feats a day after she and her Mississippi State teammates were beaten 88-84 by Oregon in the NCAA Women’s Tournament’s Portland Regional final.

Oregon advanced to the Final Four for the first time in school history. Mississippi State missed a chance to get there for the third year in a row.

“A loss is a loss, you know. It doesn’t feel good,” McCowan said after Sunday’s game. “But I’m proud of my team, my coaching staff we got this far. We had a great season. Nothing to hang our heads on. Yeah, it hurts, but we’ll be okay.”

McCowan had a stellar senior season, carrying Mississippi State to the first SEC tournament championship in school history and earning most outstanding player honors in the process. She averaged 17.8 points, 13.5 rebounds and blocked 2.4 shots a game.

The nod from the Associated Press is her fifth All-America selection by various media outlets.

Mississippi State head coach Vic Schaefer had nothing but praise for the 6-foot-7 center who went from a project player when she arrived in Starkville to one of the best players in the country.

“I can’t tell you how proud I am of her. It’s been a work in progress for her to where we are today,” Schaefer said. “She’s going to graduate in four years, she was marginally eligible when she came to us. I’m proud of that. I’ll be in the front row when she walks that stage. Her development as a young lady as well as a basketball player is like something I haven’t seen. She’s deserving of being an All-American. … I love the kid to death, she’s made me a better coach, father, a husband.”

Schaefer had similar thoughts about a number of his players in the wake of Sunday’s loss. These Bulldogs seniors — McCowan, Jazzmun Holmes, Jordan Danberry and graduate transfer Anriel Howard — have been part of an era in which Mississippi State’s women’s basketball rocketed from mediocrity to national championship contender.

Mississippi State has a 181-39 record over the past six seasons, has made five straight NCAA Tournament appearances, and played in the national championship game in 2017 and 2018. Holmes and Howard were both honorable mention AP All-America selections.

“For us, my staff, that team in there is hurting. I am just really proud of them,” Schaefer said. “I told them, they’ve impacted a community and a university unlike anything I’ve ever seen. We could all go through life and not have the opportunity nor the impact that these kids have had on a place like Mississippi State. It is a very special place. The impact that these kids have had, like I said, it’s unlike anything I’ve seen.”

Mississippi State finished this season with a 33-3 record — its third in a row with at least 30 wins — but ran into a recurring nemesis in Oregon.

The Ducks handed the Bulldogs two of their three losses, back in December in Eugene and Sunday in Portland.

Sunday’s regional final certainly had the feeling of an away game for Mississippi State, even though the Bulldogs wore their home whites as the No. 1 seed and it was ostensibly on a neutral court. Attendance at the Moda Center was announced at 11,534, with the vast majority cheering on the second-seeded Ducks.

“Our kids, we’ve been in that environment a bunch. We played on the road in the Southeastern Conference. I just thought a great environment. I was proud to be a coach in that game today, be a part of an industry, women’s basketball,” Schaefer said. “Here is the thing. We probably could have played it somewhere else and been on a completely neutral floor and played in front of a thousand people. Do we want that or do we want to play in that environment today?”