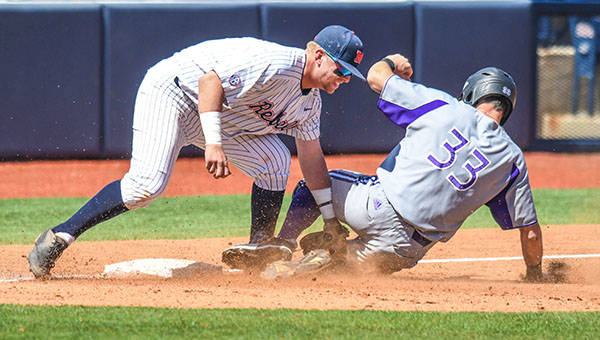 OXFORD — Just when it began to look like the Ole Miss Rebels were going to turn things around, Tuesday happened. Playing one of the worst college baseball teams in the country, Ole Miss failed to get anything going and lost to North Alabama 10-6.

“There isn’t a message. We were really bad today,” said Rebels coach Mike Bianco. “Credit to North Alabama, they played really well. It’s a team that’s struggled offensively and we gave up 10 runs and 14 hits. Just a bad day.”

North Alabama had a 5-21 record and was just 2-16 on the road. The only other power five conference team the Lions had played were two games against Alabama in which they lost 8-0 and 4-1. Ole Miss took two of three games from the Crimson Tide to open Southeastern Conference play.

North Alabama is in its first season at the Division I level. With an RPI rating of 285 in the country — out of 299 Division I teams — it’s not an opponent the Rebels expected to struggle against, much less lose to.

Ole Miss sophomore pitcher Max Cioffi made his first career start, and it wasn’t a beauty. Cioffi has been solid on the year thus far, sporting an ERA of 3.86 in 16 1/3 innings of relief, but he made it just 3 2/3 innings into his start. He allowed six hits and two earned runs. An error by Tyler Keenan kept the three runs scored against Cioffi from counting as earned in the fourth inning and Houston Roth allowed two more runs to cross the plate on three hits in the sixth.

On the day, the Rebel pitching staff consisting of Cioffi, Roth, Connor Green, Taylor Broadway, Austin Miller and Ryan Olenek allowed 14 hits to a North Alabama lineup with a collective batting average of .227.

Ole Miss got four of its six runs in the third and fourth innings off of two RBIs from Thomas Dillard and one apiece from Cole Zabowski and Keenan. The final two runs came in the bottom of the ninth on a two-run home run by Kevin Graham. The Rebels stranded 11 runners and were 4-for-14 with runners in scoring position.

The Rebels (20-10) were coming off of a series win over No. 8 Arkansas last weekend, but are now 4-4 over their last eight games. After two road conference series, the Rebels will try to regroup when Florida comes to Swayze Field for a three-game set beginning Friday night at 6:30.