Why are these rural Mississippi residents the most heavily audited taxpayers in the U.S.? 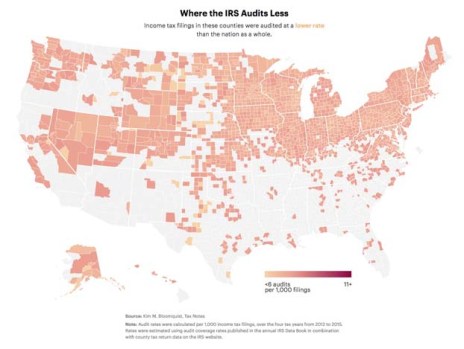 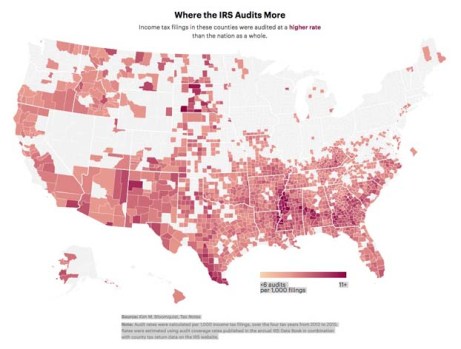 Humphreys County, Mississippi, seems like an odd place for the IRS to go hunting for tax cheats. It’s a rural county in the Mississippi Delta known for its catfish farms, and more than a third of its mostly African American residents are below the poverty line. But according to a new study, it is the most heavily audited county in America.

Where the IRS Audits More
Income tax filings in these counties were audited at a higher rate than the nation as a whole.

In a baffling twist of logic, the intense IRS focus on Humphreys County is actually because so many of its taxpayers are poor. More than half of the county’s taxpayers claim the earned income tax credit, a program designed to help boost low-income workers out of poverty. As we reported last year, the IRS audits EITC recipients at higher rates than all but the richest Americans, a response to pressure from congressional Republicans to root out incorrect payments of the credit.

The study estimates that Humphreys, with a median annual household income of just $26,000, is audited at a rate 51 percent higher than Loudoun County, Virginia, which boasts a median income of $130,000, the highest in the country.

Kim M. Bloomquist, the author of the study, which was first published in the industry journal Tax Notes, served as a senior economist with the IRS’ research division for two decades. He decided to map the distribution of audits to illustrate the dramatic regional effects of the IRS’ emphasis on EITC audits. Because more than a third of all audits are of EITC recipients, the number of audits in each county is largely a reflection of how many taxpayers there claimed the credit, he found.

In counties with the highest audit rates, there were about 11 audits per 1,000 tax returns filed each year, he found, which is more than 40 percent above the national average.

The map reveals wide variations in the audit rate from place to place, but also how certain groups of Americans are disproportionately affected by the IRS’ policies.

The five counties with the highest audit rates are all predominantly African American, rural counties in the Deep South. The audit rate is also very high in South Texas’ largely Hispanic counties and in counties with Native American reservations, such as in South Dakota. Primarily poor, white counties, such as those in eastern Kentucky in Appalachia, also have elevated audit rates.

The states with the lowest audit rates tend to be home to middle income, largely white populations: places like New Hampshire, Wisconsin and Minnesota. Generally, the IRS audits taxpayers with household income between $50,000 and $100,000 the least.

Where the IRS Audits Less
Income tax filings in these counties were audited at a lower rate than the nation as a whole.

In an email, an IRS spokesperson said that tax returns are selected for audit without regard to race or where the taxpayer lives.

EITC audits can be punishing for taxpayers, since they routinely start with a refund being held, and can drag on for well over a year. The IRS does sponsor a program to provide free legal help to low-income taxpayers, but in Mississippi, the state with the highest audit rate in the country (according to Bloomquist’s estimates, the IRS audits about 11,000 returns there each year), there is only one attorney for the program.

“I cover all 82 counties,” said Ben Wilkerson, of North Mississippi Rural Legal Services. Out of necessity, he largely deals with his clients over the phone, counseling them on how to collect documentation to confirm their earnings or that a child lived with them for over six months of the year. “We get a lot of calls from pretty much everywhere,” he said.

Rep. Terri Sewell, a Democrat whose western Alabama district includes some of the counties with the highest audit rates, and who sits on the House Ways and Means Committee, which oversees the IRS, said in response to the study that taxpayers shouldn’t be “disproportionately targeted for claiming a certain tax credit.”

Congress, she said, “must ensure that the IRS initiates and executes audits in a fair and impartial manner.”

This story was originally published by ProPublica