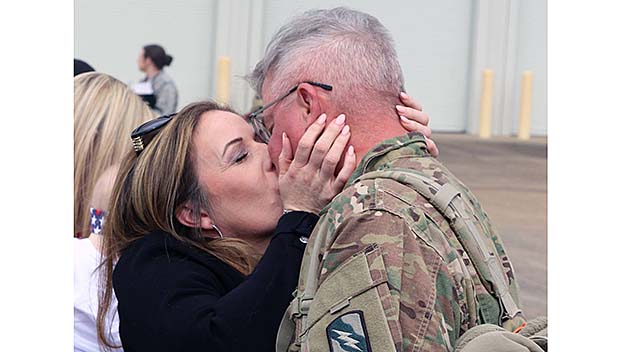 The final members of a Mississippi National Guard unit returned home Saturday from deployment in the Middle East.

About 3,250 citizen-soldiers deployed to Kuwait and other parts of the Middle East to deter and react to threats as part of Operation Spartan Shield, the unit’s third deployment to the Middle East since 2001.

The last flight landed Saturday night at Thompson Field, the Air National Guard base adjacent to the Jackson airport, where they were welcomed by family and friends with signs, hugs and tears.

“It’s been hard, you know you miss your best friend when they’re gone, Maxwell said. “But we’re excited that today’s here.”

After being overseas for a year, soldiers said they’re ready to eat good food, and relax with the family. Spc. Matthew Jenkins’ family was headed to eat as soon as they picked him up.

“It hadn’t really hit me yet. But I’m sure it will when I get to the house,” Jenkins said. “So, it’s exciting though. You know just to get off the plane and see everybody here, see everybody gathered round just waiting on their family. It’s a good feeling to know that people are here to support you and are there for you.”

The Tupelo-based brigade has units in McComb, Senatobia, Starkville, Amory, Monticello and Meridian, as well as Kansas City, Kansas. The first parts of the unit began arriving home in February, with each detachment taking about 14 days to go through demobilization and board a charter flight for Mississippi.