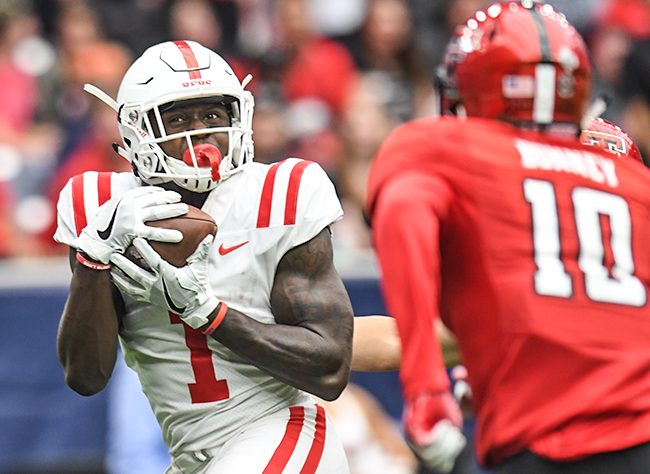 Matt Luke guided Mississippi’s football program through the dark days of a two-year NCAA postseason ban. Now the Rebels believe the young coach — along with a few veteran coordinators — can push the program back in the Southeastern Conference’s elite.

“Your job as a leader is to surround yourself with the very best people you can,” Luke said. “That’s been a big help. Two coordinators who understand the big picture. They’re not singular focused. They’ve been there, they’ve done it.
“They’re the two coordinators who make us better.”

At least from an outside perspective, Ole Miss will be a sizable underdog in the SEC’s Western Division next fall. The Rebels are coming off a 5-7 season that featured a very good offense but a terrible defense.

Now the program must replace most of those star offensive players, including quarterback Jordan Ta’amu, left tackle Greg Little and receivers D.K. Metcalf and A.J. Brown, while also doing a complete overhaul of a defense that gave up more than 36 points per game last season.

Ole Miss hopes the combined brainpower of Luke, Rodriguez and MacIntyre can fast-forward the rebuild. The most recent spring practices, including Saturday’s spring game, have been the first step in that process.

“We realize how important it is to give good ideas to the head coach,” the 53-year-old MacIntyre said. “Rich has good ideas. I’ve thrown out some things. And then things come up and we can say ‘This is how we handled it. This has happened to us before.'”

He’s one of several players who took advantage of the NCAA’s new redshirt rule, which allows players to play four games without losing a year of eligibility. The 55-year-old Rodriguez, who is making $900,000 per year on a three-year deal, said Corral has adjusted to the new offense quickly.

“He can make all the throws and he’s a willing runner,” said Rodriguez, who has been head coach at West Virginia, Michigan and Arizona. “He wants to be really, really good. I could sense that in my first conversation with him. I’m really excited about him.”

The Ole Miss offense put up big numbers last season, gaining more than 510 yards per game. But the Rebels were often all-or-nothing on that side of the ball, hitting on big pass plays for touchdowns or leaving the field quickly after just three plays.

That meant the Rebels’ defense — which was already a problem — spent a lot of time on the field.

Luke hopes Rodriguez’s offense will be a little better at grinding out drives and the extra time of possession will give the defense time to rest and regroup.

“The mindset will be a little different, a little more edge,” Luke said. “A little more of an understanding about what we can do to help the defense and find a way to win football games. Maybe not as flashy of numbers, but more wins.”

MacIntyre, who is on a three-year deal worth $1.5 million annually, comes to Ole Miss after six seasons as the head coach at Colorado. The 2016 AP Coach of the Year said he’s been pleasantly surprised to find the Rebels do have some good pieces on defense.

The trick is pulling the best out of them.

“They’ve been beaten down a little because they haven’t done as well,” MacIntyre said. “My job is to make them realize they can make plays, they can be good, here’s what we need to do and here is how we’re going to do it.”

The Ole Miss overhaul is refreshing for a program that could use a fresh start. The Rebels are 16-20 over the past three seasons while dealing with the constant shadow of NCAA sanctions that included a two-year postseason ban and scholarship reductions.

Now those obstacles are largely gone. Luke — with ample help from Rodriguez and MacIntyre — is working to make Ole Miss a factor in the SEC’s Western Division once again.

Luke said the best part of the group is no one’s worried about egos. Just wins.

“That’s what really impressed me about Matt — he wanted us to have input and give ideas,” Rodriguez said. “But he’s confident enough in himself that he’s still the leader. He’s shown that.”