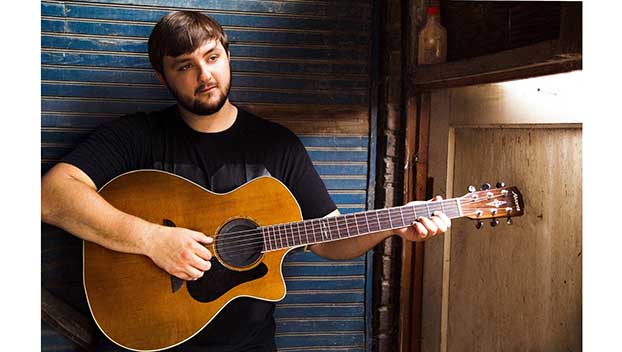 By the age of 4, Chance Stanley could sing every line from “Jailhouse Rock.”

He doesn’t remember where he learned the song. His parents weren’t musically inclined. He doesn’t recall listening to Elvis records.

But his folks dressed him as a young, prison-clad Presley and had him perform at local festivals.

“There’s not a lot to do in Marietta,” Stanley said, laughing. “I guess singing and dancing was it. My mom is pretty creative so she got me started doing that.”

While the dancing may not have stayed with Stanley all these years later, the music did. At 22, he’s left the gold lame behind for an acoustic guitar and a start as a real musician.

“I started playing guitar around 15 or 16,” he said. “I wasn’t doing much musically in that time in-between, other than listening to it.”

Looking up to musicians like Paul Thorn and Chris Knight, Stanley’s love for the independent path of playing and releasing music has steered him into songwriting and performing, something that brings out the performer in him.

“I have a love for being on stage,” he said. “That was always what I wanted to be. Some kind of a performer. I don’t know what attracts me to it but it’s a rush. It’s a thrill. I like getting reactions out of people whether it’s making them smile or cry. I love that connection. I like being in front of people.”

Stanley notes the irony in his passion, as he’s admittedly a shy individual.

“If I’m just around people, I’m pretty quiet. But when I’m up there? It comes out,” he said. “I’ve been playing solo for a little over a year now and I’ve really enjoyed playing locally as well as venues in Tennessee and Alabama.”

Getting his feet wet with live performances has come in handy, as Stanley has decided to spend the summer on the road following his college graduation.

He’s booked the entire nine-state tour himself, wrapping it just in time for his pending nuptials to his fiance Alexa in October.

“It’s just going to be me and my guitar,” he said. “It’s going to be awesome. I’m graduating in May and I’ve decided this is what I want to do with my life and this is how I’m going to go about it.”

Stanley’s experience as a student in the Entertainment Industry program at the University of North Alabama helped with his bookings, following some early discouragement.

“I was getting turned down some and I started taking it in a different approach,” Stanley said of setting up his tour.

Now he’ll kick off on May 31 in Mississippi before making the rounds. He’s also playing at the Amory Railroad Festival in April as well as opening for The Bellamy Brothers at the Crossroads Arena in Corinth on June 20.

When he’s not in class or performing, he’s writing and interning at the BancorpSouth Arena in Tupelo.

“It’s been a great experience for me,” he said. “I’m always learning new things. Music is the goal, but if it weren’t to work out, I’d really love to be a booking agent or a road manager. Being an artist is really what I want to be, though.”

Stanley has certainly been moving in that direction in the past year, with the release of his EP “Dry,” available on Spotify and iTunes, and his music video collaborations with Six Shooter Studios in Baldwyn for his songs “Dry” and “Crosstie Town.”

“I’m a lyrics guy,” Stanley said. “I love hearing a good story or something that just makes you feel something. Whether it’s sad, happy or mad … as long as it’s getting a reaction, I believe it’s worth a lot.”

For now, Stanley said he plans to keep writing, playing and hitting the road.

“I’m excited for what the future holds,” he said.

Get ready, it’s almost love bug season and it…