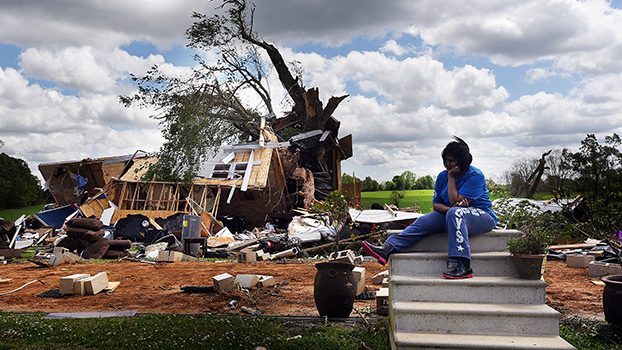 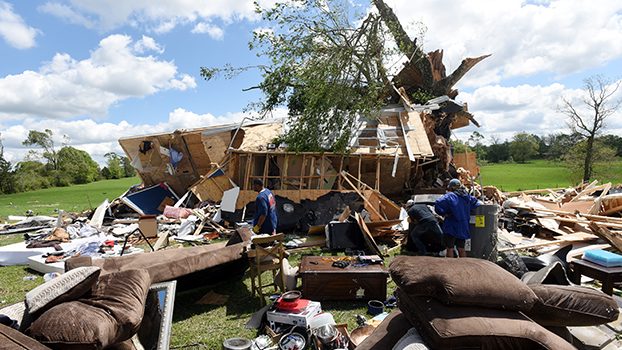 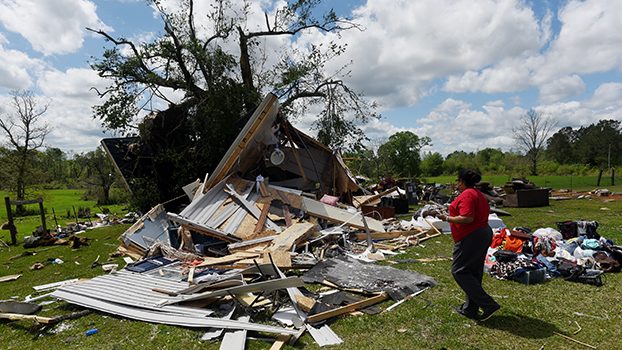 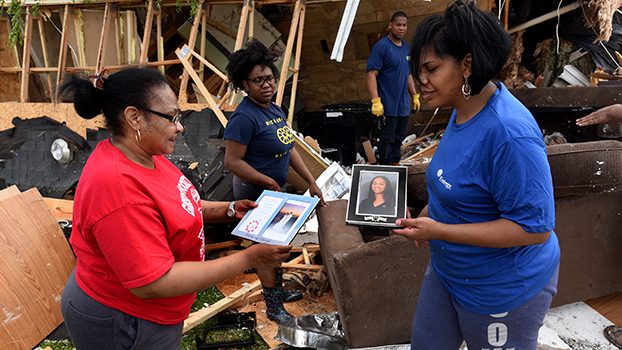 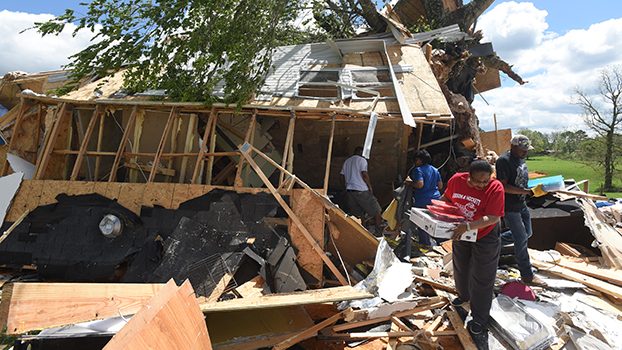 Family members say they feel blessed, even though a tornado destroyed their mobile home on Gaulden-Clinton Road south of Centreville Sunday night.

Peter Lollis said he, his wife and two children had decided to go out to eat in Zachary, La., before the storm hit at 6:37 p.m. Sunday

“We left an hour before the storm,” Lollis said. “After the storm passed through, neighbors called us to tell us (of the news) and we raced back to see the damage.”

“It looks like the tornado damage started in this area and went north,” Lollis said.

North of Lollis’ property a line of trees were bent over and snapped into pieces.

Lollis said his family will stay with a family member until they can rebuild.

Family members spent most of the morning sifting through what was left of the house, collecting wedding pictures and other mementoes.

“Like I told my wife, we can rebuild,” Lollis said. “I just thank God that we were not there when it happened.”

“Law enforcement reported a tornado touchdown at 6:37 p.m. and they reported some tree damage and mobile home damage in Centerville,” said Freddie Zeigler, a NWS meteorologist for New Orleans/Baton Rouge. “We do have a survey team that is out right now that is going to assess how long the track and how wide the tornado was and also the strength of the tornado.”

Zeigler said radar indicated possible circulation and touchdown in that area at the time of the incident, and he anticipates the team, based out of Slidell, Louisiana, would have more information from the assessment later Monday afternoon.

“It took off some tin and part of a porch on (a woman’s) house,” Powell said.

Zeigler said Wilkinson County residents reported the damage to the NWS between 5 p.m. and 5:11 p.m. Sunday.

“Around 5 o’clock there was a funnel cloud near Woodville,” Zeigler said, “and this was received from the public as a possible funnel cloud and lowering clouds. We also had reports about 5:10 of hail, 1 inch, and that was reported in Woodville. At 5:11 we also had a report of wind damage. Multiple trees down. That was near Pinckneyville and that was in Wilkinson County, 15 miles west of Woodville.”

Zeigler said the team would assess the damage in Woodville as well, but as of Monday morning the damage on Pinckneyville Road was not being labeled a tornado.