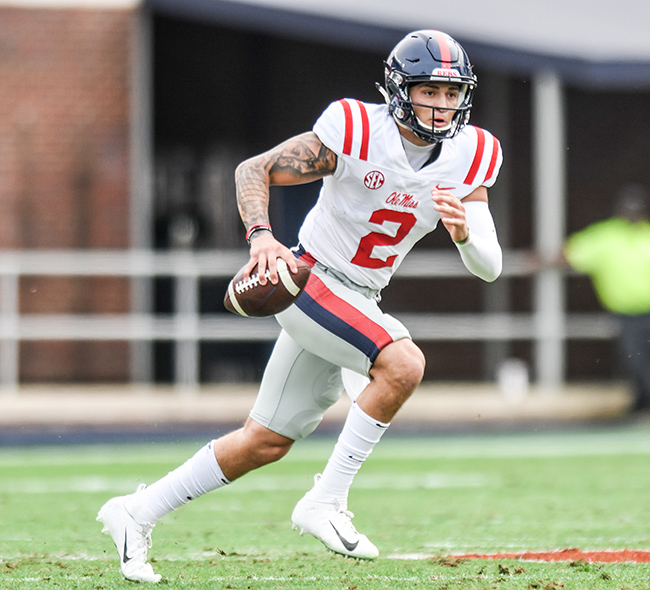 Ole Miss played its annual Grove Bowl spring football game on Saturday afternoon at Vaught-Hemingway Stadium. The Ole Miss defense won the game 29-25, in a game where the defense was spotted 27 points from the start.

The first time for Rebel fans to get a look at the new-look Ole Miss offense and new defense, both sides of the ball made flashes on Saturday. It was pretty at times, but a lot of times it wasn’t.

Seven of the first eleven completions for Corral went in Moore’s direction. Working in the slot in replacement of A.J. Brown isn’t easy, but Moore looked like he solidified his spot as Corral’s go-to guy. A completely re-worked receiver group losing three likely NFL Draft picks, Ole Miss needs guys to step up, and Moore wasn’t the only one.

“He’s as competitive a football player we have. That’s what usually shows up,” said offensive coordinator Rich Rodriguez, talking about Elijah Moore. “He’s a really good football player and football is really, really important to him. It’s showed up this spring.”

Dontario Drummond made a great catch from Corral in the second quarter, laying out to get the Rebels within the ten yard-line. The next play, Braylon Sanders caught a fade in the corner of the end-zone. Demarcus Gregory and Miles Battle were among others taking first-sting reps at the receiver position.

“Elijah is one of those guys that is really smart. He understands defenses and he was one of the first receivers to really click with me. It just happened to be that way,” Corral said.

Corral finished the day 22 for 37 with 240 yards, 1 touchdown and 1 interception. Moore had a team high eight catches for 79 yards.

The defense did a good job of pressuring the Ole Miss quarterback on Saturday, despite rarely dialing up many blitz’s. Forcing three interceptions, one on Corral, the team did a good of controlling the game from their side of the ball.

“We’re just a hard team that’s going to get after you. We want to put pressure non-stop,” said linebacker Mohamed Sanogo. “That’s going to be our mentality and the identity of our defense.”

The Matt Corral-led offense got down into the red-zone twice early, both stopped by the defense for field goals. On one of the drives, Matt Corral was intercepted on a tipped pass in inside the ten yard line. The defense let up a late touchdown before, intercepting the two-point conversion attempt and taking it back for a score.

3. None of the backup quarterbacks

Considering both of the backup quarterbacks on the roster were true freshman, it shouldn’t be a surprise that they struggled on Saturday. That said, every Ole Miss quarterback not named Matt Corral were not very good on Saturday afternoon.

Corral got every other series under center, with Grant Tisdale, Kinkead Dent and a sprinkling of others filled in the non-Corral snaps. They had their moments, and Tisdale may have had the upper hand. But if, God forbid, if something happens to Matt Corral this year, Ole Miss could be in trouble.

Tylan Knight and Snoop Connor both looked really impressive in a running back rotation. Knight is a sophomore and Connor a true freshman. While Connor saw more looks in a traditional running back role, Knight saw a lot of snaps split out wide as a receiver.

At one point in the third quarter, Knight caught a long fade route from the slot in the corner of the end zone from Tisdale for a touchdown of around 20-yards.

“There were times when they looked like they were getting ready for the prom, like they were supposed to be in high school,” Rodriguez said. “There were also times they showed some pretty neat stuff. I like those guys.”