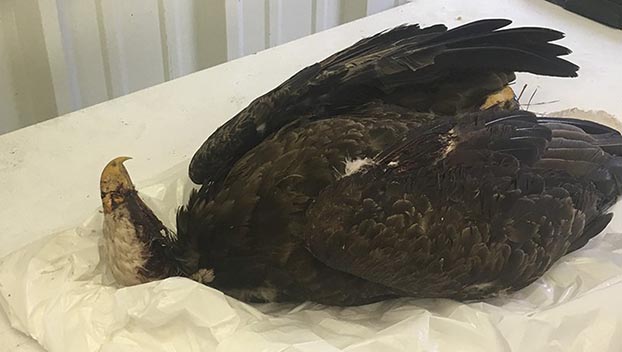 The U.S. Fish and Wildlife Service and Arkansas Game and Fish Commission are conducting a joint investigation into the death of a mature bald eagle found in Drew County March 28.

The dead eagle was found near Tennessee Spur Road, west of Monticello and transferred to the Little Rock Zoo, where veterinary staff determined the preliminary cause of death as a gunshot wound. Monticello, Arkansas is across the Mississippi River from Greenville.

The female eagle’s body was found near a nest, and it is believed that the bird was tending the nest at the time of death.

A reward of up to $6,000 is being offered for information leading to the arrest and conviction of the person or persons responsible.

Anyone with information involved in this case is encouraged to contact the AGFC’s Stop Poaching Hotline at 800-482-9262. All calls to the hotline will be kept confidential.

Although the bald eagle was removed from the endangered species list, it remains a federally protected bird.

The 1972 amendments to the Bald and Golden Eagle Protection Act increased civil penalties to a maximum fine of $5,000 or one year imprisonment with $10,000 or not more than two years in prison for a second conviction.

Felony convictions carry a maximum fine of $250,000 or two years of imprisonment. The fine doubles for an organization.