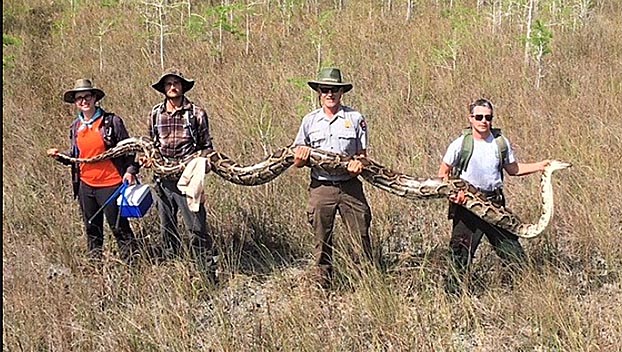 An enormous snake measuring more than 17 feet in length and weighing 140 pounds was pulled from the Florida Everglades.

The snake is a near record for the longest ever found in Florida. An 18-foot python weighing more than 100 pounds was found in the past.

The python is not a native species to Florida and poses large threats to other native wildlife.

Staff with the Big Cypress National Preserve reported the snake was caught due to a different approach to research and tracking.

“Using male pythons with radio transmitters allows the team to track the male to locate breeding females,” staff members posted to social media. “The team not only removes the invasive snakes, but collects data for research, develop new removal tools, and learn how the pythons are using the Preserve.

By tracking one of the males that had a transmitter attached, they found this massive female nearby.

Pythons were first found in the Florida Everglades in the 1980s, believed to have been released there by pet owners. The snake species quickly propagated and began threatening other wildlife. They’ve been a considered a problem ever since.

Due to their large size they have few natural predators in the Everglades, primarily only alligators and people.

Although no one knows for sure, wildlife experts estimate their population in Florida could number in the tens of thousands.