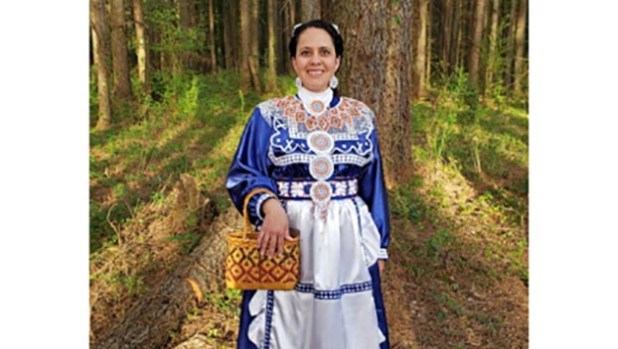 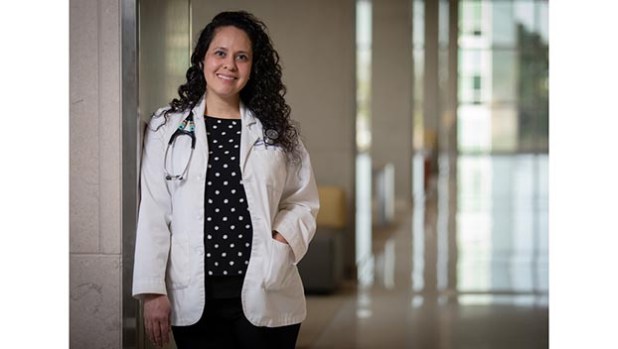 Christina Wallace is on her way to becoming the first member of the Mississippi Band of Choctaw Indians to earn a medical degree from the School of Medicine. 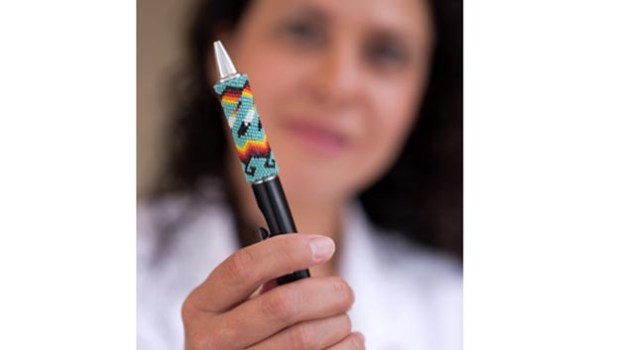 This beaded writing pen is among the gifts Wallace received during her send-off party at the Choctaw Health Center. 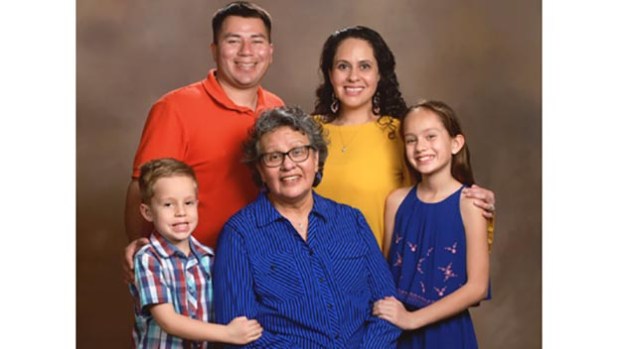 On graduation day, Wallace will celebrate with her family: her husband, Wes Wallace; her son, Jake; her mother, Barbara Willis; and her daughter, Ansley. (Photo courtesy of Lifetouch Church Directories and Portraits, Inc.)

JACKSON, Miss. – On the day Christina Wallace said goodbye to her friends at the Choctaw Health Center, they brought out a cake glazed with stethoscope- and lab coat-frosting.

They gave her a real stethoscope and a writing pen, both decorated with Native American hand-beaded designs.

“They filled a bowl with notes written on sheets of paper – ‘prescriptions for success,’” Wallace said.

Everything that day served as a reminder either of where she came from or where she was going.

Now, four years after her sendoff to medical school, Wallace is about to graduate, apparently as the first member of Mississippi Band of Choctaw Indians to earn a medical degree from the School of Medicine at the University of Mississippi Medical Center.

“It took me several years to get here,” she said, “and it couldn’t be better.”

In March, her desire to stay in Mississippi as a practicing physician received a boost during the School of Medicine’s annual Residency Match Day ceremony, when anxious, graduation-bound medical students find out, and publicly announce, where they’ve been accepted for specialty training.

“My family and I were too nervous to attend,” Wallace said. “I was afraid we were going to have to move away for my residency.”

So, while most of her fellow students in the Class of 2019 were mounting the stage at Jackson’s Thalia Mara Hall, Wallace was at her home in Neshoba County’s Edinburg community waiting to learn her fate by email.

“When the notification came,” she said, “we screamed with joy.”

The verdict: She will do a residency, in medicine-primary, starting this summer at UMMC.

“Christina already knew as a [first-year student] that she wanted to be a primary care physician,” said Weatherly, who specializes in internal medicine and geriatrics. “She asked me at that time what she could do to be more competitive, and she did it.

“She’s going to be a force to be reckoned with in this state.”

For most of her life, this state has been Wallace’s home. In Tucker, one of eight Choctaw Indian Reservation communities in Neshoba County, she didn’t know any Native American physicians while she was growing up there. But she did know a “traditional healer.”

“He was my grandfather,” Wallace said. She had watched with pride as members of the tribal community came to him for comfort and help.

“It showed me that he was a figure of respect,” she said. “That’s something I’ve always remembered.”

That same type of regard, she noticed, was paid to her mother, Barbara Willis, who, until her retirement in February, was a registered nurse for years at the G.V. “Sonny” Montgomery Veterans Affairs Medical Center in Jackson.

Before that, for more than a decade, Willis worked in a Phoenix, Arizona, hospital, sometimes accompanied by her only, very observant, child.

“As a single mom, she worked extremely hard,” said Wallace, who moved back with her mom to Mississippi from Arizona in 2001. “I saw how she interacted with her patients, and it intrigued me at a young age.

“I’ve had the same kind of interactions with patients here; I’ve cried with them or given them a hug, or put a hand on their shoulder. I believe I really learned from my mom that the way to treat people is with compassion and respect.”

Yes, she did, said Dr. Michelle Horn, associate professor of medicine at UMMC. “Christina is one of the most deeply caring medical students and people that I have encountered during my career,” Horn said.

Wallace’s compassion for patients and colleagues will be publicly recognized on May 3, during the School of Medicine’s Awards Day, when she and fellow class member R.J. Case will be presented with the 2019 Leonard Tow Humanism in Medicine Award.

“She has an innate ability to make patients and their families feel at ease and is able to explain things to them in such an easy-to-understand manner,” Horn said. “Even for physicians it’s sometimes difficult to achieve this skill, but with Christina, it’s a part of her nature, and patients certainly respond to that and to her.”

Wallace would eventually draw inspiration from other role models, including Weatherly. “She is amazing,” Wallace said. “When you see Dr. Weatherly with her patients here, you say, ‘this is the type of physician I want to be.’”

Apparently, though, there aren’t many physicians who share Wallace’s heritage. Mississippi is home to only a handful of American Indian or Alaska Natives who practice medicine. There were only 15 as of 2014, reports the Association of American Medical Colleges “Diversity in the Physician Workforce.”

When Wallace’s class graduates, on May 24, she will become only the seventh Native American Indian known to have earned a medical degree from this School of Medicine, according to the Office of Student Records and Registrar, which doesn’t track individual tribes.

Several members of the Choctaw Tribe have earned degrees from other schools at UMMC, including nursing and health related professions. One of Wallace’s cousins, an R.N., graduated from the School of Nursing.

But, even across the country, physicians who reported as American Indians-Alaska Natives alone and in combination with another race made up only 4,099 of the estimated 727,300 active physicians in 2016, the AAMC reported in October 2018.

Because minorities’ access to health care usually suffers compared to their white counterparts’, the AAMC recommends more diversity in the workforce as one antidote.

Wallace wants to be part of that remedy in her home state. “I plan to practice in Mississippi and stress to my patients the importance of preventive care. At some point, I want to get back to my community.” Because it’s also about that, and family.

“I’ve been around certain family members who became ill and had questions about their medical condition,” she said.

“I wanted to be able to explain what certain lab results meant, to be able to let them know what medical counseling was available. That was really what hit home – wanting to be able to answer their questions.”

Positioning herself to get those answers took some time. There were rainchecks along the way. She and her husband, Wes Wallace, have two children— daughter Ansley, 11; and son Jake, 6. Although she has wanted to be a doctor since she was a young girl, after majoring in chemistry at the University of Mississippi, Wallace focused on getting a job and earning a living.

“But I knew if I didn’t pursue this goal of getting into medical school, it would haunt me,” she said.

Four years ago, she was able to banish the ghost of her dream deferred: She applied to medical school, braced by a Tribal Scholarship and by encouragement and advice from members of her community, including Dr. Gregory Gordon, a psychiatrist with the Choctaw Health Center and a member of the Mohawk tribe.

By then, Wallace had worked in the biomonitoring and chemical terrorism section of the Mississippi State Department of Health Public Health Laboratory; as an environmental specialist/manager with the Choctaw Tribe; and, at the Choctaw Health Center in Neshoba County, as a patient liaison.

Even before her first year as medical student, she already tasted of the joys of patient care. “Working as a liaison at the health center, I learned the patients’ perspective,” Wallace said. “I also got speak the Choctaw language with them, mixed in with some English.”

That experience made her lean ever harder toward primary care. “I like the clinical setting,” she said. “I like being a busybody of sorts, and seeing patients regularly to make a connection with them.”

During her residency, Wallace will commute the 60-plus miles from her home to Jackson, but during some “tough” months she plans to stay overnight occasionally with her mom in Jackson. This was her pattern in medical school.

“My husband often took care of the kids alone,” she said. “A lot of credit goes to him.”

Along the way to her degree, she has tried to serve as an example, maybe even a recruiter, in a community whose members are spread over 10 Mississippi counties. A few years ago, in Red Water, Wallace shared her experiences with her daughter’s second-grade class. A couple of years later, she was a Career Day speaker at Choctaw Central High School.

“I would hope that some tribal members see a Choctaw woman attaining a medical degree, and would be inspired,” she said.

Chief Anderson should put her mind at ease about that: “I have had the great pleasure of watching Christina Wallace grow in her career, pursue her dreams and continuously raise the bar over and over again,” she said in a statement.

“In 2015, as we transitioned to a new Choctaw Health Center on the Reservation, Christina was the community/patient liaison specialist and was absolutely essential in the success of this move. She is competent, goal-driven and a true forerunner in her field.

“She is certainly an inspiration and source of great pride for all Choctaws as she is paving a new path for our young Chahta girls.”

On commencement day, during a reception her family will hold for her, Wallace will wear a traditional, hand-sewn Choctaw dress made by her mom.

Celebrating with her that day will be two potential medical school prospects – a daughter who now wants to be an artist, and a son who loves all things military. When they were younger, though, they were “surgeons.”

So Wallace has a plan. Before graduation, she’ll take Ansley and Jake on a tour of a place that symbolizes her long-awaited accomplishment: the School of Medicine – where you don’t have to get on a plane to soar.