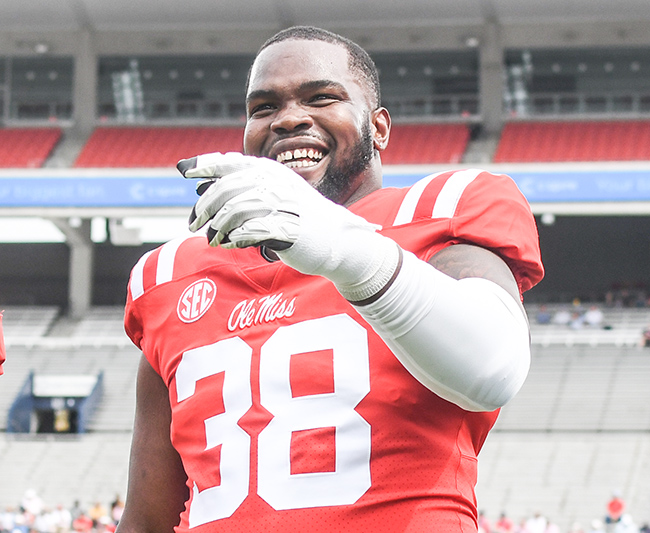 When it came time for Ole Miss football head coach Matt Luke and the rest of his defensive coaches to select who would wear the prestigious No. 38 next season, a player that would be considered an outside the box selection came to mind.

During a ceremony on Saturday morning ahead of the Grove Bowl, Austrian Robinson heard his name called as the winner of the 2019 Chucky Mullins Courage Award. Robinson will wear Mullin’s number during the 2019 season, as is tradition for all winners. The defensive lineman also wore the jersey during Saturday’s annual spring game.

The award, sponsored by Phi Beta Sigma fraternity, honors the late Chucky Mullins, who had his football career come to an end during the 1989 homecoming game against Vanderbilt. Mullins was paralyzed after making a tackle and two years later passed away. He would have turned 50 this year.

“(Robinson’s) got a blue collar mentality that everybody respects,” Luke said. “Maybe not flashy to the people on the outside looking in, but he exemplifies the courage that I think represents what this award is about.”

Robinson was the 29th recipient in the 30-year history of the award during a ceremony that was presented by the Ole Miss M-Club and held at the Grill at 1810. D.T. Shackleford won the award twice during his Rebel career.

The honor came as a shock to Robinson, who is a native of New York, New York. Not having the Mississippi ties made the senior feel he would not be chosen, or even considered, to wear No. 38. Once his name was called, the importance of what Robinson was receiving sunk in.

“It’s an honor,” Robinson said. “My freshman year when Mike Hilton won it and seeing how he played every played in practice and just how he carried himself on the field, I just know No. 38 means something. …On game days just knowing everybody going to be watching (me) and I’ll have to make a difference.”

During his three-years at Ole Miss, Robinson has appeared in 26 games, playing in 11 games last season. He has 52 career tackles and 5.5 tackles for a loss. Completing his final spring as a Rebel, Robinson impressed Luke and his staff by ‘battling’ through some injuries and showing why he was the one chosen out of several players considered to continue Mullins’ legacy at Ole Miss.

“When we just started thinking about it, I think you have a bunch of great candidates,” Luke said. “Usually there’s one that just kind of makes sense and the more we talked about it the more we knew (Robinson) was the right fit.”