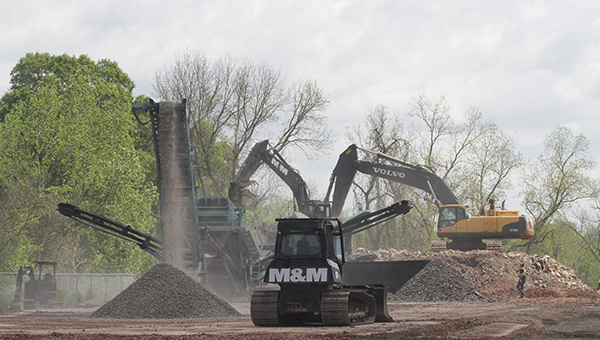 All that’s left is cleaning up the rubble.

Rubble and a slab were all that’s left of the buildings on the Kuhn Memorial Hospital property in Vicksburg, Mississippi, as equipment for contractor M&M Services were busy Tuesday afternoon milling concrete and taking away the remnants of what was Kuhn’s main building.

“It’s an awesome feeling,” Mayor George Flaggs Jr. said as he talked about the final demolition. “It’s unbelievable. We were able to do what we said we were going to do, and this is just phase one.”

Flaggs said he is convinced the city can turn the 12.8-acre property into a multipurpose development featuring residential, retail and recreational areas.

“The second phase will be declaring urban renewal, and then the third phase will be getting requests for proposals and start looking at them,” he said. “It (the process) is non-stop.”

The Kuhn demolition began with a special ceremony Feb. 5 that drew people who worked on the hospital staff when Kuhn was a state hospital.

A city-owned building, Kuhn was funded and operated by the state of Mississippi as a charity hospital until 1989.

In 2000, the Lassiter-Studdard Group Inc., which owned the property at the time, donated it to the Esther Stewart Buford Foundation.

The vacant facility was believed by many to be haunted.

Since then, the property was sold six times for taxes, and city officials tried for at least the past 10 years to get the property owner to clean the property and demolish or renovate the buildings on the site. The board on July 6, 2017, put the 12.8-acre property under the city’s slum clearance ordinance in a move to step up its efforts to remove the complex’s main building.

When the parties with an interest in the property failed to present plans to either raze or renovate the buildings by September, it cleared the way for the city to begin the process for their demolition.

The city officially took title to the Kuhn property Nov.1, 2017, after reaching agreements with the four parties that had interests in the property.

The decision to acquire the property came after the board in April 2016 approved a resolution adopting and authorizing a 33-page urban renewal plan to first demolish the buildings on the property and clear it, then begin the process of finding a developer or nonprofit agency to develop it into a multipurpose residential/commercial development with recreational facilities.