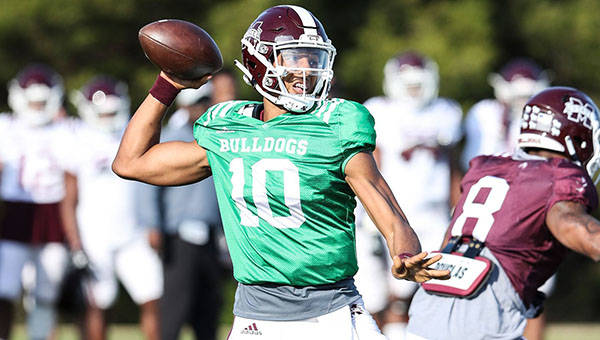 With one eye on the weather and one eye toward next season, it’ll be Spring Football Saturday in Mississippi this weekend.

It’s the last big day of college football in the state until preseason practice begins in August. It’s also the last chance for players to make an impression on coaches until then, or to get some positive momentum going for themselves.

“Spring ball isn’t about having fun, but just having preparation for the fall,” Southern Miss junior defensive back Ky’el Hemby said. “We know kind of who a starter is, but every position is up for grabs. I was a starter last season, but coming out this year and earning my spot again is what it’s all about. We have competitions and get after each other, but at the same time we encourage and pick each other up. Everyone is coming for another man’s job.”

Belhaven will begin the day at 10:30 a.m. in Jackson. Like most schools, its festivities will include more than just a football scrimmage. A cookout and spring awards ceremony is also planned.

Southern Miss is up next, at 11:30 a.m. in Hattiesburg. The annual Black and Gold Game will feature honorary coaches Reggie Collier and Brett Favre. Prior to the game, there will be a free children’s football clinic from 9 a.m. to 10:30 on the game field. Admission to the game is free.

The Mississippi State baseball team will also host a weekend series against Alabama — Saturday’s game starts at 1 p.m. as well — while the soccer and volleyball teams will play exhibition matches and the women’s tennis team hosts LSU Sunday at 1 p.m.

One of the big question marks for Mississippi State this spring has been the progress of junior quarterback Keytaon Thompson. He’s taking over the starter’s job from Nick Fitzgerald, who set the Southeastern Conference career record for rushing yards by a quarterback.

Mississippi State coach Joe Moorhead said the improvement of Thompson’s teammates is helping the quarterback to also get better.

“I think we’re seeing small, positive gains by him on a daily basis,” Moorhead said after a scrimmage last week. “I’m most impressed with his improved decision-making and accuracy thus far. I think that comes with confidence of year two in the offense and quite frankly, how we’re protecting. I think we’re seeing some of our receivers separate versus press coverage, which was a point of emphasis this spring, and catch the ball consistently so I’m happy with his progress.”

The three spring games on Saturday follow those of Ole Miss and Delta State last week. Alcorn State and Jackson State had also scheduled their spring games for this weekend, but canceled them because of the potential for severe weather across Mississippi.

Most of the events surrounding the Alcorn and JSU spring games were also canceled, although indoor banquets at both schools will go on as scheduled.

“Although we are disappointed in the cancellation of our spring football festivities for Saturday, we remain very excited about the 2019 football season,” Jackson State Director of Athletics Ashley Robinson said in a statement.