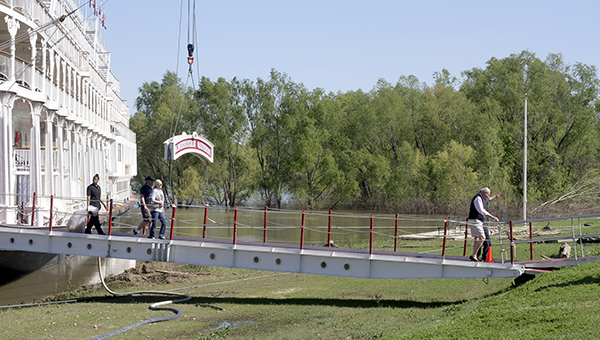 Viking River Cruises are one step closer to coming to Vicksburg.

The Board of Mayor and Aldermen Wednesday signed a letter of intent with Viking USA LLC to lease a section of the city’s riverfront to the cruise line to dock its cruise boats.

“What it says is that we agree to lease them a portion of property north of the water front and they’re going to construct a docking facility for their cruise line, and they will pay us $1 per passenger,” city attorney Nancy Thomas said. She said the lease will be a 20-year lease with a 5-year extension.

Thomas said after the meeting Viking has been approaching all of its proposed ports with letters of intent prior to coming in and building its facilities.

“It’s (the letter) general terms, but once they get all those (letters) from the other ports up the river, then they’ll start doing the actual lease agreement and the improvements,” she said. “My understanding is they’re moving forward with everybody.”

According to information accompanying the letter, the first boat is expected to be completed in 2021 and the second boat in 2023.

Each boat is expected to accommodate about 390 passengers. If Viking terminates the lease, Thomas said, the facility the company builds, which will be attached to city property will become city property.

The timeline for construction of the new dock depends on getting finalized agreements with other river cities.

He called the potential agreement “great news. It’s my understanding that those boats are luxury boats, and the first luxury-type cruise boats on the Mississippi. They (Viking) have been working on this for years. I think this is going to be a significant improvement to the waterfront.

“If we are able to do the other things … I think you’ll see a riverfront you’ve never seen before, because we’ll have pavilion and an amphitheater. I just think we’re headed in the right direction.”

Those additional improvements and additions to the riverfront are part of a proposed $11 million project.