Potentially dangerous weather headed to Mississippi this afternoon and into tonight 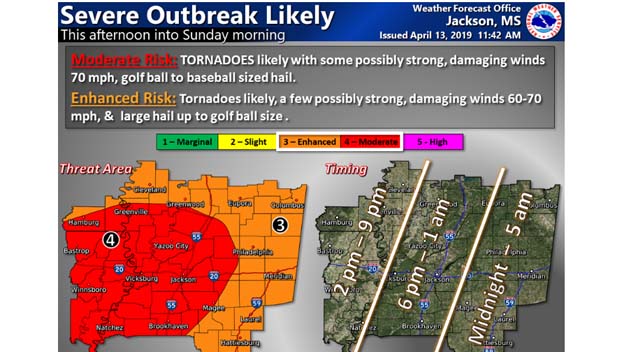 A nasty line of thunderstorms is expected to move across much of Mississippi Saturday afternoon and into Sunday morning.

The hail could be from golf ball to even baseball size weather forecasters predicted.

“Tornadoes are likely throughout the entire region with some strong and long track tornadoes possible,” weather forecasters predicted. “Large hail and damaging wind gusts will be a significant threat as well.”

The front passed through Texas earlier Saturday where authorities say about a dozen people in Texas have been injured in powerful storms that have spawned at least one suspected tornado and damaged homes and other property.

He says two people were taken to a hospital with injuries that aren’t thought to be life-threatening and that about a dozen others were treated at the scene for minor injuries, including people who had to be extricated from their homes.

Yezak says two of the people injured Saturday when a likely tornado touched down near the cities of Hearne and Franklin were taken to hospitals with non-life-threatening injuries.

The storms are part of a large system moving through the southern U.S.