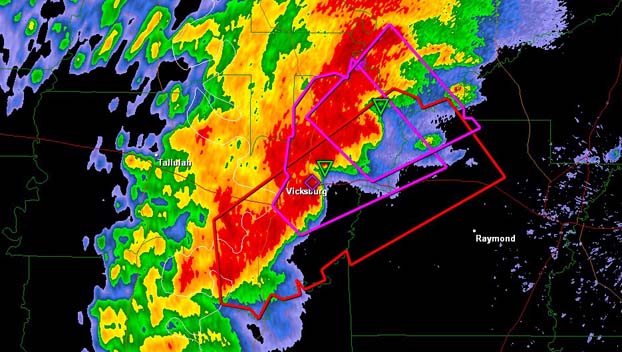 WJTV reported a tornado had touched down at approximately 4:15 p.m.

Twitter users reported damage to the Kroger grocery store and UPS Store roofs as well as cars destroyed in that area.

Additional damage was reported on Clay Street. Portions of Pemberton near the Vicksburg Mall were reported closed.

View from Vicksburg, MS just before the tornado came through. Saw power flashes in the rain core coming straight toward my location just before seeking shelter. #msws pic.twitter.com/0SBCkPVkl5

A portion of Interstate 20 beginning at mile marker 4 is closed due to large trees across the highway.

The powerful storm system that is passing through Mississippi this afternoon and into tonight is part of a huge system that started in Texas this morning, where several people were reportedly injured earlier Saturday when a tornado ripped through the area.