Ten tornadoes hit Mississippi over the weekend, two were nearly half a mile wide 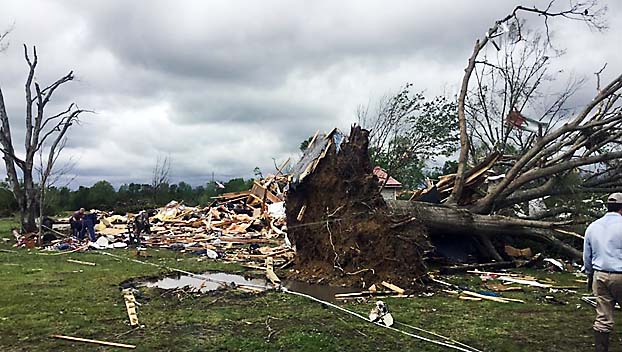 National Weather Service assessment teams from the Jackson, Memphis and New Orleans offices assessed storm damage Sunday and have reported a total of 10 confirmed tornadoes touched down across a wide swath of Mississippi late Saturday afternoon and into the night.

Two storms were believed to have swelled to nearly half a mile wide as they ripped through the countryside.

One man was killed an approximately two dozen were injured in the wake of the storms. Dozens of houses and commercial structures were reported damaged.

The deadly storm that struck the small town of Hamilton in Monroe County, due north of Columbus, was estimated to be rated as an EF 2 tornado, packing winds of up to 130 mph. The storm was on the ground for more than 11 miles and had a maximum width of approximately 800 yards.

The twister was on the ground for approximately 17 minutes.

In southwest Mississippi two tornadoes were reported in Vicksburg in Warren County. Both of those were EF 2

Jackson
We will be sending out two more survey teams today. One team will head back to Warren County and then to Tensas and Madison Parishes. The other team will head to Covington, Smith, and Clarke Counties. We know there are more areas that will need to be surveyed as well (Yazoo, Holmes, and Attala Counties for instance). Those we will try to get to tomorrow and Wednesday.

For more details on the strength of each tornado visit: https://www.magnoliastatelive.com/2019/04/15/mississippis-tornadic-weekend-by-the-numbers-details-of-each-known-twister/

More survey teams are out today to assess damage so it’s likely the official tornado county will rise in the days ahead.