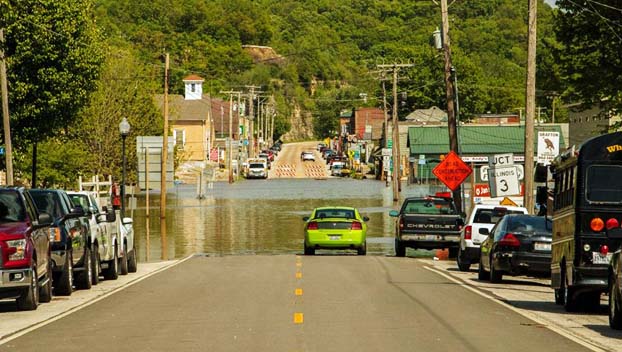 A flooded street in Grafton, Illinois (photo by Talia Long).

American Rivers and its partners called on state and federal agencies to prohibit the reckless raising of levees and promote better flood protection solutions.

“The America’s Most Endangered Rivers report is a call action to save rivers that face a critical decision int he coming year,” said Eileen Shader with American Rivers. “It’s time to stop the illegal levee development on the Upper Mississippi that is putting
people and river health at serious risk.”

“We are already feeling the impacts of climate change in the Midwest, including more frequent and severe flooding, and it’s only going to get worse. Abusing and degrading the Mississippi River will make us more vulnerable to these threats. Protecting and restoring the river will make us better prepared to face future floods and safeguard communities. It’s our choice to make.”

The Upper Mississippi River is threatened by levees that are being raised (i.e., made taller) without required permits and approvals. Eighty miles of levees between Muscatine, Iowa, and Hamburg, Illinois, have been raised without obtaining the required state or federal approvals.

These levees not only destroy critical riverside and floodplain habitat for fish and wildlife, they also make flood heights higher and increase flooding downstream.

For example, during the most extreme flood events, Hannibal, Missouri, is projected to experience an additional foot or more of floodwaters because their neighbors have raised their levees without regard to the impacts.

American Rivers and its partners called on the U.S. Army Corps of Engineers, the Federal Emergency Management Agency, and the states of Illinois, Iowa and Missouri to take corrective action to stop and resolve these levee violations. Further, the groups called on the agencies to advance 21st century flood protection solutions that deliver multiple benefits to people and nature.

“We have to stop the circle of absurdity where we spend enormous sums of money to build larger levees which make the next flood even worse and costs us millions more in emergency funds, only to have the entire cycle repeat year after year,” said David Stokes with the Great River Habitat Alliance.

“We must move beyond this outdated vision of flood control that foolishly relies on bigger and higher levees and floodwalls to a new vision that makes room for rivers and allows nature-based solutions to protect us,” said Elliot Brinkman with the Prairie Rivers Network.

The threats posed by these unlawful changes are real and getting worse as climate change is leading to more frequent floods and intense storms in the Upper Mississippi River Basin and across the country.

The three highest-volume rain storms ever recorded in the U.S. have occurred in the last three years, in line with climate scientists’ projections that extreme downpours in the U.S. could increase by 400 percent by the end of this century.

Munoz et al. (2018) determined that the magnitude of 100-year flood events in the Mississippi Basin has increased by 20 percent over the past 500 years, with much of that increase being caused by the combination of river engineering and climate change.

The increased risk of flooding is the reason some levee districts have pursued higher levees, but their actions are intensifying the impacts of flooding for their neighbors.

The Mississippi River is a globally significant flyway used by hundreds of species of birds and provides unique habitat for fish, mussels, reptiles and mammals.

This significant ecosystem supports commercial and recreational fishing, hunting and boating, which contribute $24.6 billion to the region’s economy and an estimated 421,000 jobs. The river has been the lifeblood of many cultures throughout history and has served as the inspiration for a rich heritage of American music, art and literature.

The annual America’s Most Endangered Rivers® report is a list of rivers at a crossroads, where key decisions in the coming months will determine the rivers’ fates. Over the years, the report has helped spur many successes including the removal of outdated dams, the protection of rivers with Wild and Scenic designations, and the prevention of harmful development and pollution.

America’s Most Endangered Rivers® of 2019

#4 Green-Duwamish River, Washington
Local leaders must produce a flood protection plan that safeguards communities and restores habitat for chinook salmon — fish that are essential to the diet of Puget Sound’s endangered orca whales.

#5 Willamette River, Oregon
The U.S. Army Corps of Engineers must immediately improve 13 dams to save wild chinook salmon and steelhead from going extinct.

#6 Chilkat River, Alaska
The Japanese investment firm, DOWA, must do the responsible thing and back out of a mining project that could decimate native salmon.

#7 South Fork Salmon River, Idaho
The U.S. Forest Service must safeguard endangered fish by denying a mining proposal that could pollute this tributary of the Wild and Scenic Salmon River.

#10 Stikine River, Alaska
The International Joint Commission of the United States and Canada must protect the river’s clean water, fish and wildlife, and indigenous communities by stopping harmful, polluting mines.

American Rivers celebrates the progress Cleveland has made in cleaning up the Cuyahoga River, fifty years since the river’s famous fire that sparked the nation’s environmental movement.