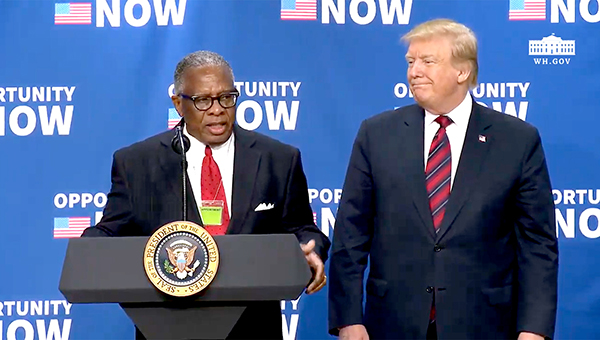 Vicksburg Mayor George Flaggs Jr. had the chance to share details of economic development in Vicksburg and Warren County with the highest officials in government Wednesday as he met with President Donald Trump and federal economic officials.

Flaggs visited the White House to discuss the success of Opportunity Zones in Vicksburg and Warren County.

“I remain optimistic about the opportunities that lie ahead for the City of Vicksburg as a result of my continued relationship with the White House,” Flaggs said.

On the Opportunity Zones, Flaggs described to the president and others, including National Economic Council Director Larry Kudlow, U.S. Treasury Secretary Steven Mnuchin and U.S. Department of Housing and Urban Development Secretary Ben Carson how Vicksburg and Warren County are capitalizing on the program, which was created under the 2017 Tax Cuts and Jobs Act to encourage private investments.

“As a mayor of the city and a former legislator for 25 years, I’ve never seen any piece of legislation that allows more collaboration between federal, state and local government,” Flaggs said while standing next to Trump.

Low-income communities, defined as census tracts with a poverty rate of 20 percent or greater and/or family income less than 80 percent of the area’s median income, were eligible for consideration as Opportunity Zones.

Each state was allowed to nominate up to 25 percent of the total number of eligible low-income community census tracts within the state. The U.S. Department of Treasury approves the nominated census tracts and administers the Opportunity Zone Program.

States were required to submit Opportunity Zone applications to the U.S. Department of Treasury no later than March 21, 2018.

Mississippi accepted and reviewed applications for tracts to receive consideration.

Gov. Phil Bryant submitted his nominations to the U.S. Department of Treasury on March 19, 2018.

“I’m committed to doing everything in my power to make certain that Vicksburg has a seat at the local, state, and federal negotiating tables as long as I’m mayor.”