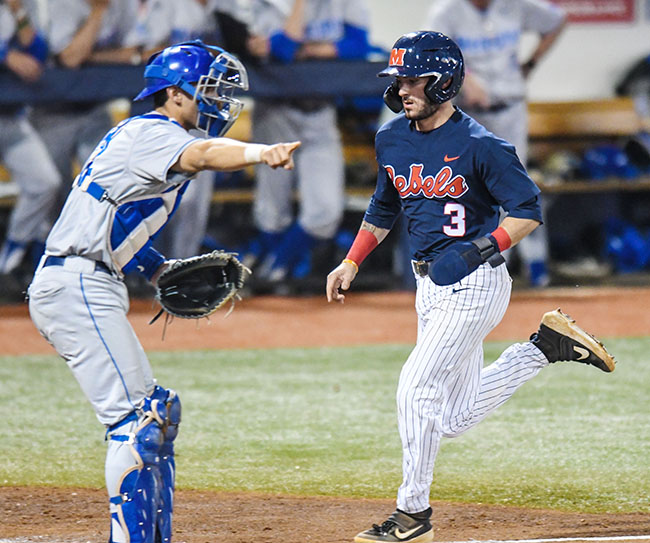 While it’s not Friday, when we typically run our ‘what to expect’ baseball weekend preview, Ole Miss is also a bit off-schedule this weekend.

The Rebels travel to Auburn this weekend for a three-game series against the unranked Tigers, a three-game series running Thursday to Saturday. Working through a rough stretch, Auburn has lost six of their last seven including a mid-week game on April 9 to Jacksonville State.

For the Rebels, despite losing both games of a doubleheader to Kentucky, they have still won six of their last eight games. However, there’s some injury concerns and questions marks as they hit the road. Here’s four things to keep an eye on entering the Auburn series.

First base: Ryan Olenek’s hip injury and his potential replacement
Ole Miss center fielder Ryan Olenek hurt his hip Sunday running into the center field wall and falling back to the warning track. Leaving the game immediately after the collision, Olenek has not done any baseball work since the incident. Head coach Mike Bianco was short when asked about Olenek after Tuesday’s win over Memphis. When asked if Olenek is available for the weekend, he replied with a quick “I don’t know that.”

Reading body language suggests that Olenek’s hip injury is a bit more serious and that he may be sidelined for a little while. True freshman Josh Hall made his first career start for Ole Miss in the wake of the Olenek injury, going 1-2 with an RBI and a walk on Tuesday.

Replacing Olenek’s team-leading .370 batting average won’t be easy and expecting Hall to come anywhere close isn’t remotely fair. But what Hall can provide is speed on the base paths. In high school, Hall set the national record for stolen bases.

Second base: Austin Miller’s dominance in the set-up role
Mike Bianco went to the bullpen in the seventh inning on Tuesday. With two runners on an just one out, it was junior reliever Austin Miller getting the call. Miller has come in the game in a lot of these high-pressure situation of late and has really excelled.

On Tuesday, Miller struck out the first two batters he faced to end the inning, pitching 1.2 innings without giving up a hit. In his last three appearances, he hasn’t given up a single run.

“That’s what he’s done all year. We’ve had a lot of really good closers over the year, but I’m not sure we’ve had a better guy before the closer than him,” Bianco said after Tuesday’s game. “He’s been thrown in the fire in tough innings like he was tonight… he’s done a lot for us this year.”

Third base: Question marks in the rotation
Ole Miss has now gone two consecutive weeks without naming a starter for the Sunday game. Freshman Gunnar Hoglund returned to the mound to start last week after getting replaced by Houston Roth the week prior, but it’s unsure if he’ll be back in the Sunday role this week.

Junior Will Ethridge had one of his best outings on the year last Friday, but he is yet to be fully healthy. Ethridge is dealing with a blister on the middle finger of his throwing hand, something that is liable to flare up at any minute or imperfect condition.

At bat: Rebels playing more small-ball
As touched on above, the starting of Josh Hall could bring with it a bit of a philosophical switch for Ole Miss. Tuesday, with Hall in the lineup, Ole Miss utilized more small-ball tendencies – bunting to both advance baserunners and to get on base.

Against Memphis, Josh Hall brought in a run on a suicide squeeze just two batters after Anthony Servideo reached base on what appeared to be a sacrifice bunt that he out-ran. Ole Miss may resort to more of these small-ball tendencies if Olenek is unable to go on the weekend.

“We got a couple bunts down, that’s more bunts than I think we’ve had all year in one game,” said head coach Mike Bianco. “We have two guys that are able to do it and that was part of the big inning, part of the reason we won the game.”

The first of three games against Auburn will start at 6 p.m. on Thursday evening. All three games will be available to stream at SEC Network +.