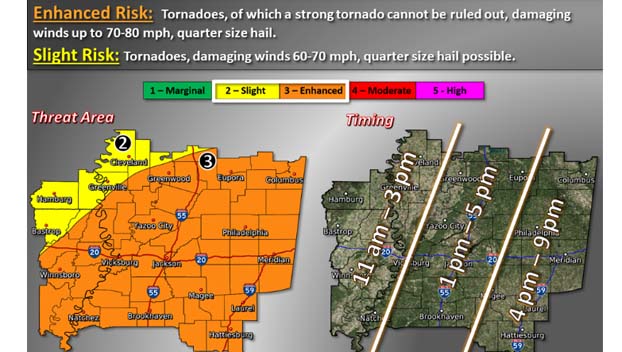 Severe thunderstorms rumbled across North Texas, the Texas Panhandle, Oklahoma and southeastern Kansas, producing several tornadoes and unleashing widespread hail. The storm system is headed to Mississippi, less than a week after more than a dozen tornadoes ripped through the state last Saturday.

Seven tornadoes were reported across the Plains from the northeastern Texas Panhandle to southeastern Kansas. Strong winds hit elsewhere Wednesday evening, toppling utility poles and trees and downing power lines in parts of North Texas. No significant structural damage has been reported.

The storms were expected to move Thursday into the Deep South, including much of the southern half of Mississippi where forecasters predict rainfall totals of between 1 and 4 inches and thunderstorms capable of producing strong tornadoes and hail up to the size of quarters.