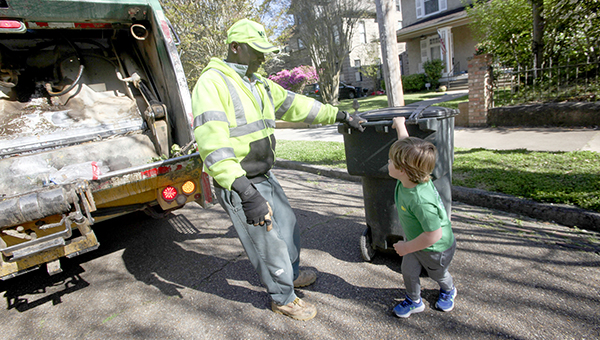 Three-year-old William Kidder has not let his tender age limit him from doing good deeds.

For over a year now, this spirited little boy has been looking out for the guys who drive by and pick up the trash on his street, and when they need a cool drink, he hands them a bottle of water.

“We laugh because he usually causes a traffic back up and we will wave to the cars waiting on him to finish helping the garbage men,” William’s mother Laura Blackledge Kidder said.

And don’t think for one minute, William’s actions have gone unnoticed by the men who work for Waste Management.

Jimmy and Johnny, as William calls his two friends, have been touched by his caring actions.

“Whether sunshine, cold, rain, sleet or a snow day, this little boy sits and waits twice a week for the trash men to run on the street where he stays just to tell them thank you for the job we do and to give us a bottle of water,” Jimmy Williams said, with Johnny Thomas agreeing.

Some may not realize that riding on the back of the Waste Management truck is a dangerous job, Williams said, “And it really touches our hearts that someone so small recognizes the job we do.”

“It’s a warming feeling and it just touches us,” Thomas added.

Laura said she and her husband Abe could not be more proud of their son’s actions.

“We always try to teach him to give to others and be kind to everyone he meets,” she said.

“And First Baptist Church also teaches him the same thing through their preschool program and Sunday school class.”

Fascinated with the garbage men and truck since he was tiny, Laura said her son would hear them coming while playing outside and run to see them.

“I can hear them coming when they’re on Ci Ci’s street,” William said.

Ci Ci is his great aunt, who lives on Baum Street.

Thomas said he remembers the first time he met William.

“He was on the outside for the first time with the water waiting, and now we just have a connection, and every time I see him he just brings joy,” Thomas said.

William said, “Both of them hang off the back of the truck,” (referring to Johnny and Jimmy) and added there have been times they have even let him help out.

“I have thrown the boxes in,” William said.

“He gets right in the middle of them loading boxes, pulling the handle to crunch the trash, crawls up in the cab to give the driver a water, and gives them all a high five,” Laura said.

“And the men are always so friendly to him,” she said. William even refers to them as his “best friends,” Laura said.

William has been offering Jimmy and Johnny water for about a year and a half now, Laura said.

There have also been occasions he has given the guys Gatorade, cupcakes and holiday treats.

During this interview, William said, “Let me show you what I have for the trash men.”

And with that he ran out of the room and when he returned, he was grinning from ear to ear as he held up boxes of chocolate Easter bunnies, which he was calling “hummy yummies.”

Laura said he wanted to get them for Jimmy and Johnny and was planning on giving them to the men on Tuesday — one of the two days they are scheduled for garbage pickup on Chambers Street.

Williams and Thomas concurred that it has meant a lot to both of them to see a little boy so excited when they drive down the street.

“He is so happy to see the truck coming down the street, and it’s a good feeling to see a 3-year-old happy,” Thomas said, adding, “And he hollers ‘bye’ as we drive off.”