Mississippi FBI agent earns pair of awards for his work 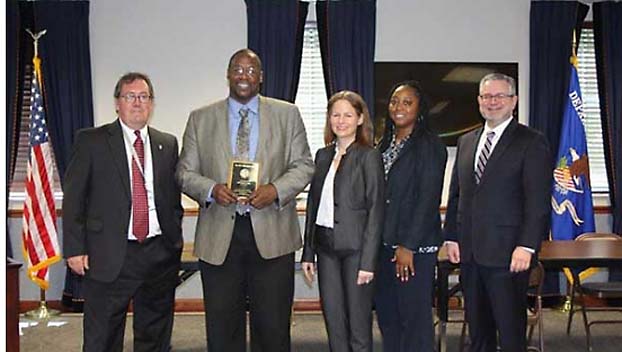 An FBI Special Agent based in Mississippi was recently recognized with two special awards from the agency for his work on investigating civil rights and human trafficking crimes and helping the victims of those crimes.

FBI Special Agent Walter Henry, of the FBI Oxford Resident Agency, was honored by leaders from the Department of Justice, FBI and the US Attorney’s Office when he received the FBI’s National Civil Rights Program Award for his lifetime of achievement in investigating Civil Rights Cases.

Henry received the national award last week in a ceremony attended by family, co-workers and friends. Henry was again recognized on Friday in a ceremony at the US Attorney’s office for his work with crime victims.

The FBI’s Civil Rights Program Award is an annual award recognizing outstanding cases, programs, or individuals, inside or outside of the Bureau, who are working Civil Rights Crimes and Human Trafficking threats.

The goal of the award program is to highlight the exemplary work of those investigating civil rights matters, and promote the FBI’s civil rights mission, foster liaison relationships, and enhance education and outreach efforts. In Henry’s case, he received the award not because of a specific investigation, but for his entire career’s dedication to the investigation of Civil Rights and Human Trafficking cases.

Assistant Special Agent in Charge Bryan McCloskey of the Memphis Field Office supervised Henry for several years while they were both a part of the FBI Oxford Resident Agency Office and was on hand to introduce Henry and help present the award.

McCloskey highlighted the positive impact that Special Agent Henry’s work has had not only in Mississippi, but across the nation. Because of Henry’s experience, empathy and investigative abilities, he has been assigned to assist with difficult and politically charged investigations across the United States. McCloskey noted that in addition to his work in other cities across the country on sensitive civil rights cases, Henry has handled the majority of civil rights cases in this district during the previous year and has helped train law enforcement officers and other individuals across the state of Mississippi on investigating and dealing with suspected civil rights cases.

During the ceremony, Henry was commended for his work with victims, community leaders and civil rights organizations. McCloskey noted that Henry’s calm and empathetic manner allows him effectively deal with emotionally charged situations and to interact with families of victims in a way that helps to bring reassurance and closure.

“Special Agent Henry exemplifies everything positive about the FBI. It is an honor and privilege to recognize SA Henry for being a leader in the FBI’s national civil rights program,” said SAC Christopher Freeze. “Walt’s work over the course of his career has ensured that the civil rights of all are protected.”

U.S. Attorney Lamar also applauded Henry, and noted that he was particularly deserving of recognition. “Throughout his career, Walt Henry has epitomized what a Special Agent with the Bureau should be. He has left an indelible mark on those with whom he has worked, done with strokes of politeness, humor and goodwill, but most of all with hard work, dedication, brilliance, integrity and humility. I can think of no one more deserving of this honor.”

During the Friday morning ceremony, Henry was recognized for his dedication to crime victims, their families and communities. A federal prosecutor introducing Henry’s award noted that Henry cares for the physical, emotional and spiritual needs of victims, recognizes the pain of family members and gently and gracefully displays compassion throughout his investigations.

FBI Agent Ryan Berthay was recognized for his dogged pursuit of justice on behalf of crime victims and for the thorough work he does on each and every investigation. Agent Mike Loggins of the Department of Health and Human Services Office of the Inspector General was recognized for his extraordinary efforts to personally meet and hear from victims of those crimes he investigates.