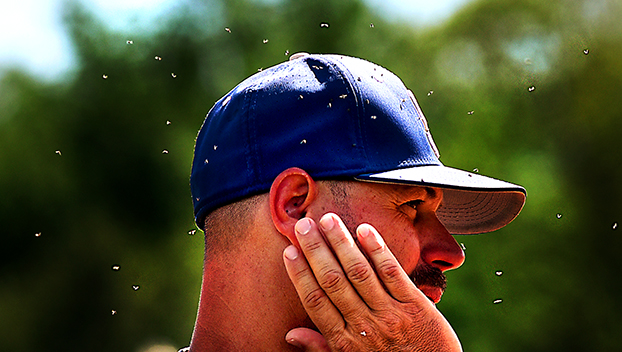 The nearly record-high flooding along Mississippi River in recent months has contributed to yet another tiny problem — one with wings.

“The gnats came out yesterday,” said Ricky Smith, owner of Bug Busters Pest Control at 5152 U.S. 84 in Vidalia. “They breed in running water, the higher the water is, the more gnats you’ll have. … They’ve always been here, but never as bad as they have been in recent years. We’ve had more flooding in the last decade or two than we’ve ever had.”

Jason Jones, an Adams County Extension Agent, said standing water in people’s yards, such as bird fountains and pet’s water bowls, can serve as breeding grounds for the pesky little insects — some of which have been known to bite people and animals.

“Areas with water can be a habitat for the gnats,” Jones said. “Biting black gnats usually lay their eggs in water areas and require the blood from warm-blooded animals to survive. Usually gnats don’t bite through clothing.”

The good news is, the warmer summer weather should cause the gnat population to go away, Jones said, adding that the lack of prolonged cooler weather this year may have also contributed to the nuisance population of gnats.

Smith said gnats live and thrive in temperatures between 70 and 90 degrees and anything hotter wards them off.

The two most common species in the Southern region, black flies or Buffalo gnats, have been known to bite, causing various reactions to certain people depending on their level of tolerance, Smith said.

These reactions can range from mild, localized swelling and itching to anaphylactic shock in the most extreme cases, Smith said.

“Some people are very allergic to them,” he said. “Others, such as myself, may not be bothered by them at all.”

Gnats are more difficult to control than mosquitoes because they are stronger flyers and are more numerous, Smith said, adding that the mosquito treatment that Bug Busters supplies could help diminish the gnats some but would not eliminate them.

“Vanilla is a good repellant, but normal bug repellant isn’t very effective,” Smith said. “We have a Cactus Juice that we sell that helps some people keep the gnats off. My guys have also used Skin so Soft and some perfumes. … You’ll smell like a vanilla factory but at least they won’t bother you. … The best thing you can do to keep them off is either stay inside or put something on.”

Jones said there are other combative measures people may take to both diminish the population of gnats around their houses and prevent biting animals and humans.

People can wear dark-colored clothing, which is less attractive to gnats than bright colors while owners of farm animals, outdoor pets or poultry may also use wire screens and clean out standing water sources at least twice a week to help prevent both gnats and mosquitoes from breeding, Jones said.

“Providing shelters for poultry may help since the gnats usually don’t like enclosures,” Jones said. “There are some animal products labeled for mosquitos and biting fly control that you can apply directly to chickens. Many of these products contain the active ingredient permethrin. One example is Permethrin II spray insecticide. Another product, called Ravap, has different active ingredients — tetrachlorvinphos and dichlorvos — and may also be used directly on poultry. Remember to read and follow all label directions for exact amounts and dilutions for these and any other insecticides, especially when using them on animals.”