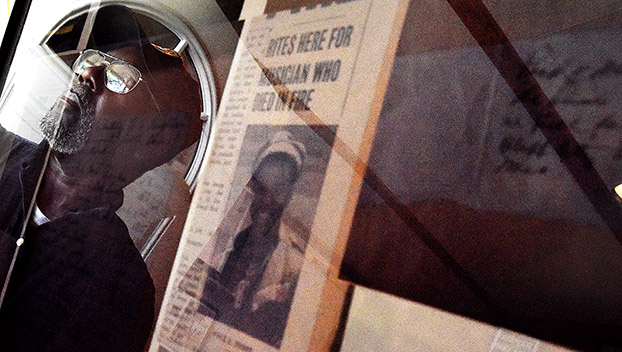 At top, Monroe Sago is reflected in pictures taken from the family scrapbook of Paul Stott, one of the musicians killed in the Rhythm Night Club fire on April 23, 1940. The family sent Sago the scrapbook from California for display in the museum on St. Catherine Street. (Ben Hillyer / The Natchez Democrat)

Each year, Monroe Sago discovers new artifacts that tell the tale of the 209 lives lost in the Rhythm Night Club Fire.

Newspaper clippings, photographs, handwritten accounts and other artifacts begin to describe the tragedy that happened 79 years ago Tuesday.

Saturday, Sago and his wife, Betty, will display one of their most recent acquisitions — a leatherbound scrapbook filled with letters, receipts, newspaper clippings and even a paystub for Paul Stott, one of the musicians killed in the fire. The Indianapolis musician played trumpet for the famed bandleader Walter Barnes.

“People were following the band from Chicago and New York,” Sago said.

At the time, the fire was the second-deadliest fire in the history of the nation. Hundreds of people who came to see the Chicago band filled the dance hall. When the fire broke out, people struggled to get out of the front door, the only exit in the building. Spanish moss used to decorate the hall made the fire spread more quickly. The building was reportedly destroyed within an hour.

Today the fire is ranked as the fourth-deadliest assembly and club fire in U.S. history.

In the scrapbook is a receipt for Stott’s funeral expenses, a letter from the American Red Cross sent to Stott’s family in Indiana, a newspaper clipping about Stott’s death and a pay stub for $10.

“That is all that he got paid for working that night,” Sago said. “Back then $10 was a lot of money.”

Sago said he received the scrapbook from family members in California and that he plans to have it and some of the contents on display during Saturday’s festivities remembering the 79th anniversary of the historic fire, which occurred on April 23, 1940.

“We will have soloists, food, a scholarship presentation and door prizes,” Sago said.

The festivities will begin at noon with a commemoration ceremony and continue until 3 p.m. on the site of the Rhythm Night Club Fire Museum on St. Catherine Street, Sago said.

Special guest during the event will be guest speaker Dr. Brenda Moore and Sago’s son, Byron Sago, who will be leading part of the ceremony.

During the event, Sago said guests would be able to visit the museum and see the collection of artifacts that detail the events of 79 years ago, including the scrapbook.

“We are hoping the community will come out to remember one of the most tragic fires that happened in the United States,” Sago said.