Felder Rushing: Vegetables are more interesting when you mix them in your landscape 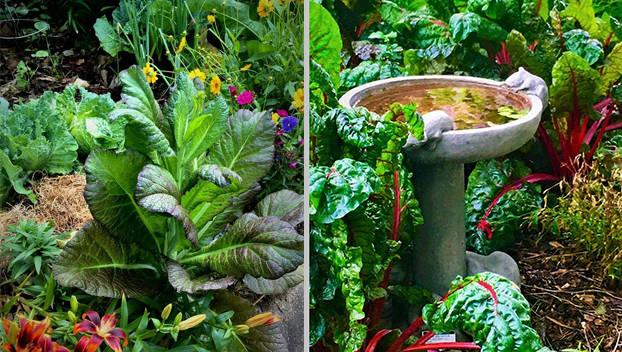 It has been brought to my attention, in a well-meaning manner by a writer, that I am apparently not very big on vegetables because I don’t write very much about them. Here’s why.

First off, the MSU Extension Service has a free publication on home vegetable gardening called The Garden Tabloid. It is absolutely the most bottom-line source of Mississippi-specific information on all things vegetables. It isn’t fluffy, no color photos or dazzling graphics, but the information is solid, from best varieties to practical planting dates. For Mississippi

Painstakingly written by horticulturist and avid home gardener Milo Burnham of Starkville, it was honored by the American Society of Horticulture Scientists are the best in the South. You can pick up a free copy at your county Extension office, or peruse it online at msucares.com (click on Lawns and Gardens, then Gardening).

Second, I don’t write much about row-crop vegetable gardening, because few subscribers to this paper actually have “mini farms” in their yards; most readers are urban folks who tend lawns, shrubs, and flower beds, with maybe a few veggies and herbs worked in. Also, traditional gardeners tend to have very specific questions that are best addressed one-on-one.

So I have concentrated over the years on making edibles more interesting as regular landscape plants. I advocate having somewhere in your garden a small but tasty mixed or potager style, sometimes called a kitchen garden. It’s a world-wide approach where flowers, herbs, vegetables, and even small shrubs are grown together in flower borders, small raised beds, and containers, It’s efficient and productive all year without a lot of equipment. Plus it looks good.

In short, rather than cater to those serious gardeners who need specific advice on efficient ways to fill a freezer and stockpile dozens of canned jars of food for later, I recommend a simpler approach to growing vegetables as ornamental plants that when you get tired of looking at them you can just eat some of them.

And it isn’t all that hard to do. Dig up some flowerbed dirt in a sunny spot, with or without edging, then mix in some compost, manure, or other organic matter (think “crumbled crackers in a bowl of chili” and you have about the right proportions). Cover the bare dirt with bark mulch to keep it cool, moist, and relatively weed free, and then start planting stuff here and there, not too close together but not in skinny rows.

When something needs replacing, replace it with something else. Think evergreen rosemary, oregano, iris, dwarf nandina, and a flower pot, birdbath, sundial, or garden saint statue, then twice a year swap out seasonal stuff such as winter pansies and kale or summer basil and peppers and zinnias.

This is how I do it in my truck garden, and how my guerilla garden friend Jesse Lee Yancy does it on a corner of a busy Jackson neighborhood street where there used to be nothing but weedy grass. His informal mix looks good no matter the season, and when something dies or gets harvested, he only has that little hole to replant, not the whole garden.

Most of his vignettes have a rock, pottery, or other hard feature to keep attention going through all seasons.

Just as no two people will put the same kinds of food on their plates at a buffet, none will use the same blend of plants. So just mix and match for color, size, shape, and season, and take it from there.

Best part about a mixed garden is that if something dies or gets harvested, nobody can tell!

Felder Rushing is a Mississippi author, columnist, and host of the “Gestalt Gardener” on MPB Think Radio. Email gardening questions to rushingfelder@yahoo.com.