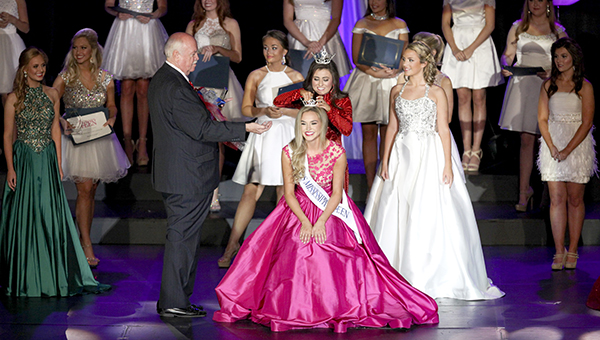 This weekend a bevy of young women will arrive in the River City to compete in the Miss Mississippi’s Outstanding Teen Pageant.

The preliminary competitions will be held on Saturday, with the final competition and crowning on Sunday.

There will be 35 contestants vying for the state title and the theme for this year’s production is “Life … The Greatest Show.”

“We would like the show to not only be entertaining, but also inspirational to the contestants and the audience. Each day is a new day to dream big and live your story, because life is our greatest show,” MMOT producer Jennifer Tillotson said.

“Kristy has been involved with pageants her whole life and it is wonderful to add her to our great team,” Tillotson said.

Taylor Thomas will be returning as the pageant’s choreographer.

In February, during a weekend of orientation, Thomas not only taught the contestants the choreography for the show but also videoed the rehearsal. Thomas then put the video on YouTube so the girls could use it to practice after returning home. That, Tillotson said, should help with this week’s performance.

“This really helps, since we just had our short weekend to practice,” Tillotson said. “We also do the same for the princesses so they can practice their dance This has worked every year.”

One challenge this year, however, is timing. The pageant has more contestants than in past years, which makes everything — including rehearsal — run a bit longer.

“We have eight more contestants, which stretches out everything including the interview process, which gets into our rehearsal time. It will also make each phase of the preliminary competition a bit longer,” Tillotson said.

The Miss Mississippi’s Outstanding Teen Pageant preliminaries are scheduled to begin at 2 and 7:30 p.m. Saturday. The final competition and crowning will begin at 3 p.m. Sunday.

All competitions will be held at the Vicksburg City Auditorium, 901 Monroe St.

The winner of the state competition will go on to compete in the Miss America’s Outstanding Teen Pageant, which will be held in Orlando, Florida, on July 27.

Tickets for the MMOT competitions are $75 for all three competitions, $25 for each of the preliminaries, and $40 for the final competition and crowning.

Tickets are available through the Miss Mississippi Pageant website missmississippipageant.com.