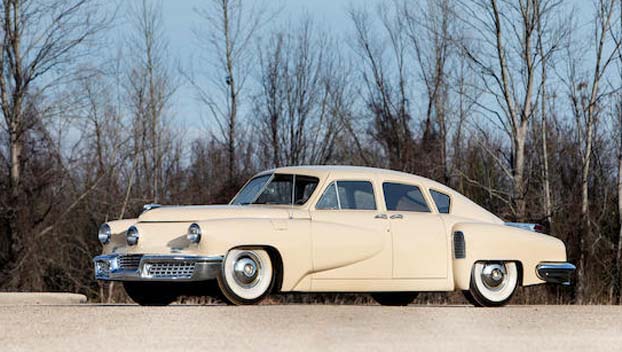 A rare collector car was sold Saturday afternoon for $1,985,000 with auction fees at the Bonhams Tupelo Automobile Museum auction.

The Tucker was the highlight of a collection of show cars auctioned Saturday as the museum is closing and liquidating its inventory.

The car, called Tucker No. 1028, was one of only 51 Tucker cars ever assembled. Only 47 are believed to survive.

The Tucker was the brainchild of Preston Thomas Tucker. His story was romanticized in the 1988 Francis Ford Coppola film “Tucker: The Man and His Dream.”

The car, completed on Sept. 19, 1948, was one of only seven cars Tucker brought to the Indianapolis Motor Speedway for endurance testing. Between Sept. 19 and Oct. 6, 1948, the car accumulated 2,931 miles at Indianapolis.

The ownership of Tucker #1028 can be traced back to the early 1950s, when it was one of six Tuckers owned by Robert J. “Bob” Turner of Minneapolis, Minnesota. Given the year and the number of cars, it seems plausible that he may have purchased them when the company’s assets were liquidated in October 1950.

At some point, Turner sold the Tucker to Thomas Goff of Utica, Michigan, who had an interest in collecting postwar luxury and special interest cars. In September 1984, Goff sold the car to Dr. Charles Lehnen, who had located it through Tucker collector Allan Reinert of Burlington, Wisconsin. Lehnen hired Car Craft Inc. of Hartland, Wisconsin, to undertake a complete restoration of the car. It was refinished in its original color, Beige.

Lehnen moved from Wisconsin to Florida, and brought the Tucker with him. He had driven the car little since its restoration, and entrusted Richard E. Jones of Orange Grove, Florida, with the task of putting the car into excellent running condition. Jones, a Tucker collector and authority, had helped to found the Tucker Automobile Club of America in the early 1970s, and was a highly knowledgeable advocate for the marque.

Over the course of six months, Jones tended to the car’s needs. He replaced a gear in the Tucker Y-1 transmission to quiet its operation, and diagnosed to a cold-running condition before pronouncing the car in good mechanical health and returning it to its owner.

It was during Lehnen’s ownership of the Tucker that it was featured in a photo shoot for the 1993 Snap-On Tool calendar, pictured with Brittney York, also known as Alison Armitage, a model an actress who later appeared in the television series Acapulco Heat.

In September 1996, Frank Spain, founder of the Tupelo museum, purchased the Tucker through Vintage Wholesale of Sarasota, Florida, and had it shipped to his new Tupelo Automotive Museum.