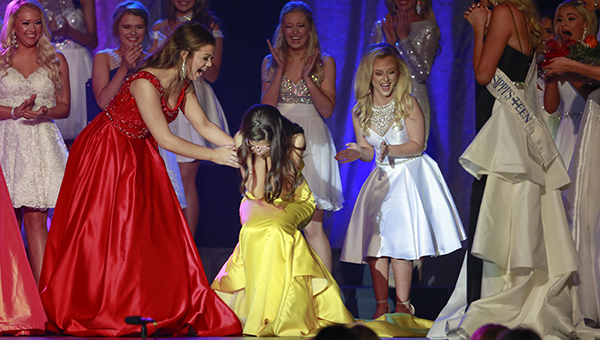 “I am so excited more than anything and I am just feeling support from everybody,” Cranberry said, after winning the state title.

During Sunday’s final round of the teen pageant, which was held at the Vicksburg City Auditorium, the top 10 finalists were named.

These young women then competed again in all phases of the competition with the exception of the private interview.

Scoring for the final competition was based on 35 percent of the contestants’ overall composite score from the preliminary competitions with another 35 percent going towards talent, 15 percent for lifestyle and fitness and 15 percent for evening gown and on-stage question.

On Saturday, Granberry had been named the winner in two preliminaries.

Though she was double preliminary winner, Granberry said, she did not let this influence her performance during the final round of the competition.

“I tried to come in thinking about this as a clean slate because that’s what is and I knew I had to execute everything just like I did yesterday and hope for the best,” she said.

For the evening gown and on-stage question phase of the competition, she wore a canary yellow gown.

“The finals were electric and amazing and I am proud of what I did and what everybody else did,” Granberry said.

As the 16-year-old Oak Grove High School student prepares for the national title, she said she would continue doing everything she had done to prepare for the state pageant.

“But ten thousand times more,” she added. “I think my new state directors are going to prepare me so well and I am really excited to start.”

In addition to winning the crown, Granberry was also the recipient of an $8,000 scholarship.

This year, 35 contestants were vying for the coveted title.