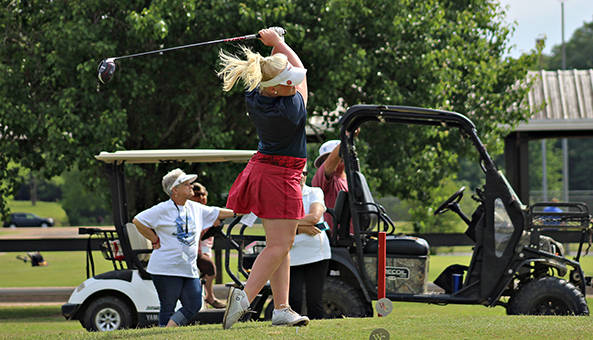 VICKSBURG — For the past five years the MHSAA Class 6A girls state golf tournament was dominated by the rivalry between Warren Central’s Karley Whittington and D’Iberville’s Hannah Levi. The two had nine first- or second-place finishes between them in that span.

Now that they’ve graduated, a new rivalry is rising up to take its place.

Hancock freshman Katelyn Altese shot a steady 75, the low round for the second straight day at Clear Creek Golf Course, and finished with a two-round total of 148 to win the Class 6A individual championship on Tuesday.

Altese shot a 73 on Monday and easily protected the four-shot lead she entered the final round with.

“It’s awesome. Putting in the work is paying off,” Altese said. “I was just trying to play the course, hit my shots and try to improve what I did yesterday.”

Altese finished eight shots ahead of her friend, Ocean Springs eighth-grader Avery Weed, who carded a 76 in the second round and 156 for the tournament.

Although Altese got the upper hand this time, it’s likely the two will be dueling for the state title for several years to come.

“It’ll be fun. We play all summer, so we always see each other. I can’t wait,” Altese said.

Weed’s round helped Ocean Springs claim the team championship. Senior Jolie Hughes shot rounds of 83 and 81 to provide a strong No. 2, and the Greyhounds totaled 320 for the tournament. Hancock was second, with a team score of 328, and Northwest Rankin was third with 334.

It was a sweet victory for Ocean Springs, which finished second to D’Iberville by 12 shots last year.

Hughes shot 164 for the tournament and finished in a three-way tie for fifth place in the individual standings, along with Starkville’s K.B. Hobart and D’Iberville’s Laura Levi.

“It’s really fun because last year we got second and that was kind of annoying, so we came up with revenge,” Hughes said. “Waiting for (Weed) was really scary. Eighty is not normal for her, and Katelyn is really, really good, so I was hoping Avery would shoot in the high 70s. It was good enough.”

Tournament host Warren Central was never in contention, but still managed to head home with some sense of accomplishment.

Anna Bull, Leanna Goss and Macy Broome all improved on their first-round scores, and as a team the Lady Vikes dropped 12 shots from one round to the next. Bull was the team’s low scorer for the tournament, at 207. Goss shot 217 and Broome 238.

“We’re trying to build consistency and improve. To play pretty much 54 holes in three days for a high school girl is pretty demanding. It was a tough day, again. The course played extremely tough. It’s a top-notch course for us to play on every day. But the girls played really, really well,” Warren Central coach Matt Williams said.

“They continue to work and get better, and over the summer we’re going to use this course to our advantage and practice as much as they can, and then come back next spring and hopefully get into the 90s like we want to be in and maybe more,” Williams added. “They’re all three still learning the game, so we’re very proud of where they are. They all cut down at least five shots, so those are very, very good scores for them at a tournament where the course is not set up to be in your favor.”