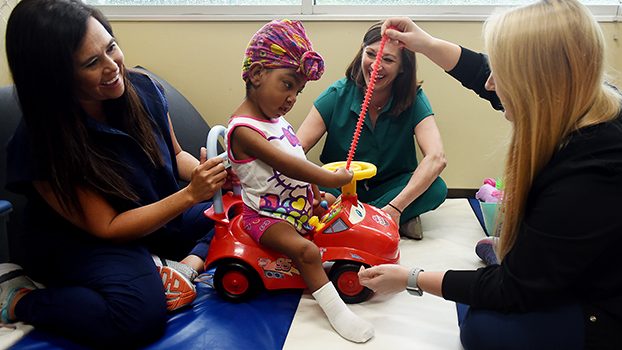 The road to rehabilitation for 3-year-old Anaysia King is not a solitary journey.

Her therapy is life-changing, her mother says.

“It has been amazing,” Brandi King said.

Thursday morning, King watched as occupational therapist Brittany Smith and speech-language pathologist Amy James encouraged her 3-year-old daughter, Anaysia, to use her feet to scoot across the floor on a toy car.

Just a few years ago, the thought of Anaysia using her hands and feet would have been unthinkable without the services offered by the Smith, James and other therapists.

“Anaysia was born with 16 birth defects,” Brandi said. “So far she has had five surgeries with more surgeries planned.”

The 3-year-old was born with Pierre Robin Syndrome, a congenital condition that often includes developmental malformations, including a smaller-than-normal jaw, a cleft palate and other anomalies.

Smith, James and other therapists from Merit Health Natchez’s outpatient clinic have worked with Anaysia since she was 11-months old.

Unable to clear her airways from mucus and other secretions, Anaysia required constant suctioning.

More than two years later, Anaysia now sits up on her own and is beginning to talk, James said.

“Now she is starting to take things by mouth, and she doesn’t have to be suctioned at all,” James said.

Born with clubfeet, Anaysia has had two surgeries — the most recent on Feb. 15 — to correct the condition.

Thursday, Anaysia laughed as she used her feet to push herself across the floor with encouragement from Smith and James.

“Now she is talking, singing and dancing,” Smith said.

For Brandi, her daughter’s improvement has been gradual but no less remarkable. She is optimistic about the future.

James and Smith said Brandi’s goals for her daughter are “doable.” The current goal, James said, is for Anaysia to eat and swallow.

“Right now she is being fed through a (feeding tube). Our major goal is to get the tube out,” James said.

Merit Health physical therapist and Director of Therapy Services Michelle Kaiser said Anaysia has many successes ahead of her, some that may have seemed impossible when she was born.

“I think she has the potential to walk with increased flexibility and strength in her hips and legs,” Kaiser said.