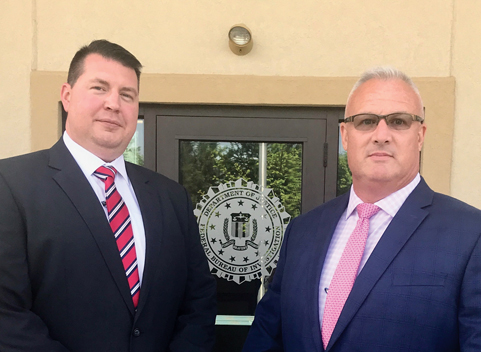 Two Tennessee law enforcement officers with the Federal Bureau of Investigation will be featured on tonight’s Dateline (NBC) episode (May 3), telling the story of how a kidnapping and attempted bank robbery investigation led to the capture of two men who planned and executed a string of crimes in Connecticut, Pennsylvania, North Carolina and Tennessee.

Elizabethton’s Jeff Blanton, an FBI Special Agent at the time of the investigation and now the Supervisory Senior Resident Agent, along with Matthew Gryder, investigator with the Johnson City Police Department and a task force officer with the FBI, will be featured in the special two-hour segment which begins at 8 p.m. Central.

In a ‘fact is stranger than fiction’ story, Blanton tells of how former Pennsylvania federal prison inmates Michael Benanti and Brian Witham used social media sites and hidden cameras to stalk bank employees and their families — including an Elizabethton mother and her 3-year-old child who they kidnapped, threatened and coerced into robbing her own bank.

At about 8 a.m. on October 21, 2015, Brooke Lyons, a teller at Northeast Community Credit Union in Elizabethton, was putting her 3-year-old son into his car seat. Benanti and Witham approached Lyons in her driveway, held her at gunpoint and forced her into their car. They blindfolded her and told her she was going to rob her own bank.

They took her cell phone and texted her supervisor that she was going to be late. When they arrived at the credit union and Lyons was allowed to remove her blindfold, she told the court she saw the two disguised in “old man” masks, and noticed a black assault rifle in the center console. Fearing for her life, she ran into the credit union, but her supervisor would not allow her access to the vault.

Lyons emerged from NECCU empty-handed, begging the two not to kill her or her son. They sped away, dropping mother and son off in a remote area of Sneed Hill Road in Carter County. Lyons contacted local authorities and the Elizabethton Police Department and the Carter County Sheriff’s Department launched a joint investigation. Because a bank was involved, then EPD Captain Joy Shoun also reached out to the FBI and Blanton.

Around lunchtime, Shoun called Blanton. “She told me about the reported robbery, and the story Lyons had told about the abduction,” he said. “She told me she thought I ought to know about it, but added that ‘something just didn’t add up.’

“I don’t know if she believed Lyons or not at that point,” Blanton added. “It was a pretty incredible story, especially in a small town like this where nothing like this ever happens.”

Blanton called Gryder and the two spent a couple of hours interviewing Lyons.

“When we walked out, we knew we had a victim,” Gryder said.

The two began their investigation, learning there had been a couple of similar robberies in Knoxville. Blanton brought in the Evidence Response Team from Knoxville and they dug deep, examining all evidence at Lyons’ home — all her electronics, her home and her car.

“At some point, Bryan O’Hare, an agent in Johnson City, pulled me to the side that day after the search had finished, and said, ‘Hey for what it’s worth, my son-in-law was struck by a vehicle running from the NC Highway Patrol on I-40 in North Carolina.’ He told me the vehicle being pursued crashed, and two suspects jumped out and made their escape into the woods, carrying large black duffle bags.”

That information led Blanton and Gryder to Maggie Valley, NC, where they pieced together evidence including that from a GPS left behind in the suspects’ abandoned car.

Still more clues led the agents to the Rebel Ridge Road area of Maggie Valley, NC, where they set up surveillance. Heavily populated with vacation homes and cabins, Blanton and Gryder learned their suspects had been staying in a cabin for several months, posing as a writer and his assistant.

The suspects moved to another property in the area, where authorities later found much of the equipment used in the crimes, including guns, shoulder holsters, elaborate rubber masks, fake IDs including fake FBI IDs, as well as 13 dossiers, including one for Lyons, and two other bank executives in South Carolina and Georgia.

On Thanksgiving Eve, Gryder got a call from the NC Highway Patrol that the suspects were leaving in a car with a stolen license plate. He advised the NCHP to pursue the men, and a few minutes later they were in custody.

“That’s when I called Jeff and we hit the road going to Asheville,” Gryder said.

“When the trooper that had transported Michael Benanti handed me a piece of paper that Benanti had with him, I knew we had the right guys because on that paper he had bank employees’ information, addresses of homes and banks, vehicle descriptions and license plate numbers.”

In the days and weeks ahead, Blanton and Gryder unraveled the case, learning of Benanti and Witham’s elaborate surveillance and planning methods, utilizing social media, Go Pro cameras and stake-outs.

“They went to social media and got names of children and grandchildren, so they would tell their hostage, ‘We have someone watching little Suzy and we’ll kill her if you don’t cooperate.’ They used other sources to find vehicle information, phone numbers, other associates, escape routes, places to park, family members, timelines — their dossiers were as detailed as our operations plans when we go out to do something.”

On July 18, 2017, Benanti, 45, was sentenced by the Honorable Thomas A. Varlan, Chief U.S. District Court Judge, to serve four consecutive life sentences plus an additional 155 years to be served consecutively in federal prison for his convictions involving a violent bank extortion and robbery spree spanning four states. According to Blanton, it was the stiffest sentence in the history of the Eastern District of Tennessee.

This article was originally published in the Elizabethton (Tennessee) Star newspaper.